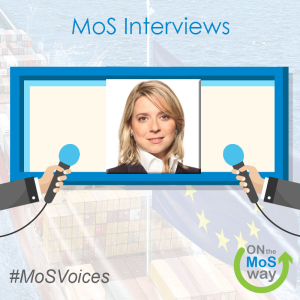 Welcome to the #MoSVoices number #5, the interview section of onthemosway.eu dedicated to the main players of Motorways of the Sea and maritime / transport sector.

In this occasion we have the pleasure to listen the Voice of MEP Claudia Monteiro de Aguiar, Member of Transport Committee in the European Parliament.

She has been President of the Casa da Madeira Association in Lisbon and MEP since 2014.

On 14th of March 2016 the INEA headquarter hosted the first Motorways of the Sea Forum on Environment: in this occasion the key players of the maritime sector were invited to give their contribution to the development of the MoS Detailed Implementation Plan forthe MoS Coordinator Brian Simpson.

During the Forum, MEP Claudia Monteiro de Aguiar was interviewed by On the MoS Way as expert on Environment and Transport.

Below the 3 questions of the interview:

Don’t forget the official hashtag #MoSVoices to follow our interviews!

Enjoy the video and stay tuned with onthemosway.eu!