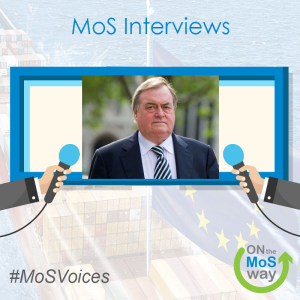 Welcome to the fourth date of #MoSVoices, the interview section of onthemosway.eu dedicated to the main players of Motorways of the Sea and maritime / transport sector. In this occasion we have the pleasure to listen the Voice of Lord John Prescott, Member of House of Lords.

Lord J. Prescott is a British politician who was the Deputy Prime Minister of the United Kingdom from 1997 to 2007. His work was always focused on Transport, Rail regulations, Integration transport policy and Environment. The UK played a major role in the successful negotiations on the Kyoto Protocol about climate change and Lord Prescott led the UK delegation at the discussions.

On 14th of March 2016 the INEA headquarter hosted the first Motorways of the Sea Forum on Environment: in this occasion the key players of the maritime sector were invited to give their contribution to the development of the MoS Detailed Implementation Plan for the MoS Coordinator Brian Simpson. D

uring the Forum, Lord John Prescott was interviewed by On the MoS Way as expert on Environment and Transport.

Below the 3 questions of the interview:

– Motorways of the Sea is the maritime dimension of the Trans-European Transport Network. How do you think MoS can be better linked into TEN-T?

– What’s the perception of MoS in your country – United Kingdom?

– The Detailed Implementation Plan for Motorways of the Sea. In your view, what should it be focused on?

Don’t forget the official hashtag #MoSVoices to follow our interviews!

Enjoy the video and stay tuned with onthemosway.eu