MoS DIP will also be presented in Rotterdam, at TEN-T DAYS 2016 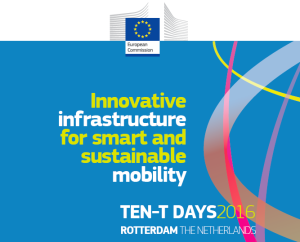 The important transport event, for initiative of the European Commissioner for Transport Violeta Bulc, in cooperation with the Dutch Presidency of the Council of the European Union, Minister for Infrastructure and the Environment will gather Ministers, Members of the European Parliament and key transport stakeholders to discuss the development of the Trans-European Transport Network, with a special focus on the Core Network Corridors, ERTMS and Motorways of the Sea (MoS), their implementation and financing.

For each Core Network Corridors, ERTMS and MoS a special focus will be put on their implementation and the related financial issues. The MoS dedicated session will take place the 22nd June and during the time slot, from 11.30 to 13.00, Mr Brian Simpson OBE, MoS Coordinator, will present the MoS Detailed Implementation Plan.

The Agenda of the event foreseen the following sessions:

The TEN-T Days will also give the possibility to the visitors to get information and contacts with projects coordinators that got EU Funds under TEN-T, CEF or H2020 Programs, the TEN-T Days Exhibition will host more than 100 different projects and initiatives.

For more information visit the TEN-T Days 2016 website and stay tuned on www.onthemosway.eu