MoS Corridor Forum: another opportunity to discuss on the priorities and future strategy of the Motorways of the Sea 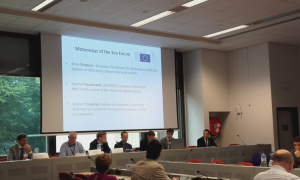 The Forum aimed at better defining the priorities and future strategy of the Motorways of the Sea as well as to showcase the most promising MoS projects that are currently being implemented.

The event was the opportunity to discuss jointly how the MOS policy could better contribute to the development of short sea shipping in Europe as well as present the current draft version of the Coordinator’s second work program. This document is essential for defining future MoS objectives and it follows the three key priorities:

The Forum was divided into three parts: the first morning session included a set of presentations by the European Commission on current policy initiatives related to short sea shipping and on the outcome of consultations with regard to the second MoS work program.

Later during the day, we heard a number of presentations about ongoing MoS projects as well as listened to a “round table discussion”, collecting various views from associations and stakeholders who are actively involved in shipping and related policy activities.

The following projects were presented – please download the presentations:

The following points were highlighted in particular: