Milestone for bunkering lng in the lower elbe 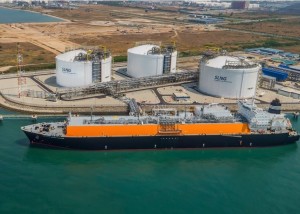 A new LNG bunkering operation in Brunsbüttel Germany is aiming to set a new milestone for establishing LNG as fuel for ships in the Lower Elbe region.

The LNG applications provider Nauticor said it conducted the largest-ever LNG bunkering operation in Germany when it refuelled the DEME Group’s hopper dredger Scheldt River with 85 tonnes of the fuel in a five truck-to-ship operation.

“The bunker operation for Scheldt River in the Elbehafen shows that LNG is increasingly establishing itself as an environmentally-friendly fuel alternative and that LNG bunker operations can be integrated into daily port operations,” said Carsten Lorleberg, project manager for LNG at Brunsbüttel Ports.

“This project reflects our dedicated ambition to develop, together with our partners, the industrial area and port of Brunsbüttel as the leading LNG hub for maritime and industrial applications in Germany.”

The experts at Nauticor, a leading provider of LNG for maritime applications, used a bunkering technique where two LNG trucks are unloaded simultaneously, which it said can allow for significant time savings when conducting a bunker operation.

DEME’s Scheldt River is currently conducting maintenance dredging works for the water authority Wasserstraßen and Schifffahrtsamt Cuxhaven on the Elbe River between Cuxhaven and Wedel. Additional LNG bunker operations for the vessel in Brunsbüttel are planned going forward.

This means that for the first time, long-standing demand for LNG as fuel for shipping is being generated along the Lower Elbe between Brunsbüttel and Hamburg.

Meanwhile, plans for the first German LNG import terminal are taking shape in the port and industrial park at Brunsbüttel.

The terminal’s close vicinity to the Port of Hamburg will offer possibilities for the diversification of natural gas supply sources and will facilitate easier access to LNG for refuelling ships and trucks.