Methanol: the marine fuel of the future 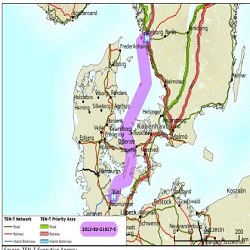 Methanol: the marine fuel of the future

This pilot action will test the performance of methanol on the existing passenger ferry Stena Germanica operating between the ports of Gothenburg and Kiel. The Stena Germanica is the world’s second largest Ro-Pax ferry. The running of the Stena Germanica on methanol will allow the vessel to comply with the new Sulphur Emission Control Area rules ahead of the 2015 deadline. The proposed Action will provide the real “live test” to prove the feasibility of methanol as a future fuel for shipping, deliver the engine conversion kit which can be further implemented on other ships, and provide the important and ultimate piloting culmination of many years of research. In addition to retrofitting the vessel, the pilot action will also create the appropriate port infrastructure for the supply of methanol for bunkering: a bunker vessel and a storage tank will be built to carry methanol, as well as the corresponding facilities in both ports. The project will bring benefits to the Motorways of the Sea (TEN-T Priority Project 21) on the Baltic Sea as well as have positive impacts on the cohesion of the entire Baltic Sea region. The results of the Action will be shared publicly with the maritime industry.