Messina and the Abu Dhabi Fund to meet 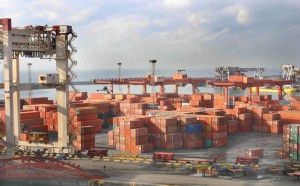 Genoa – The meeting between the top management of the Messina group and Abu Dhabi’s sovereign fund will take place next week. The fund is currently carrying out due diligence on the terminal operator owned by the Genoese shipowners who manage the area of the port at the western end of the Sampierdarena Basin. Several months ago, the Arabs visited the Port Authority to study the strategic plan for the port of Genoa and to look for possible development opportunities. The fund seems to have made contact with Messina (a company that also has a very strong presence in the Persian Gulf with its own services) during the Letta Government’s mission to the Emirates in early 2014, and has had its eyes on Genoa for some time.

The possibility that the Arabs may be interested in the port, and specifically in the Messina Terminal, emerged exactly 13 months ago, and the meeting next week, which will probably take place at Genoa Shipping Week, shows that the negotiations have moved forward. One mustn’t forget that since December 2012, the families that control the Messina empire (Messina-GAIS, Calì and Buciuni) have committed, though a complex “unpacking” operation, to the restructuring of the entire group, with the goal of eliminating all non-core businesses (brought together in the Finemme holding company), that is, those that are not connected to shipowning (the Ignazio Messina Company) and port operations (Messina Terminal).

From what has been leaked, the interest in the Messina Terminal is not to buy the business outright, but in 50% co-ownership. Possible reasons: to bring new traffic in addition to what is guaranteed to the terminal by the Ignazio Messina company alone, thus the plan to capitalize as much as possible on the Port Authority’s area between Ponte Ronco and Ponte Canepa berths. And that’s not all: at the end of July the commission passed a resolution in relation to the Toti Project which has planned a new terminal on the ILVA area in Cornigliano, which would be dedicated to coastal shipping and container traffic. Messina itself could be a candidate to manage this new facility, given this partnership with Abu Dhabi – despite the fact that the timeframes seem to be too long on this front: to build a terminal in that area (which is located west of the Messina Terminal, past the mouth of Polcevera Torrent) would be rather difficult: the prohibitions due to proximity to the airport are stringent and there can be no exceptions in relation to the approach area around the airport.

After the unexpected twist from Spinelli, which sold 45% of its logistics business to the English fund Icon, we can now see that a new international actor is about to appear in the port of Genoa with the Messina Terminal.