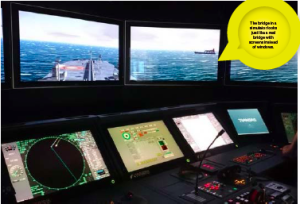 Mikael Hägg and Reto Weber of Chalmers University of Technology is leading the work on validating STM in simulators.

What is the progress to date?

Mikael: “The European Maritime Simulator Network (EMSN) created in 2014 has already been extended with four more simulator centres bringing the total number to 9. 25 bridges can now be manned simultaneously and used in the same test scenario.”

What is the main advantage of activity 3/the EMSN?

“Some of the STM concepts and scenarios can’t be tested with real ships. But in the EMSN we can put ships and crew in difficult and potentially dangerous situations, without causing any actual harm, for example testing extreme traffic volumes in congested waters.”

How does activity 3 contribute to the realisation of STM?

“Through simulations we can involve the users more in developing procedures for how work on the bridge will change once STM solutions are introduced. Simulators provide a more controlled way of collecting data and input and the tests are an important complement to the test beds on-board and in ports,” says Mikael

What is most rewarding about the activity?

“We are developing something new that can revolutionise the industry. STM has the potential to be implemented worldwide and being part of that process, working with great teams at all centres, is very rewarding.” Reto Weber of Chalmers, who is co-ordinating the test runs, adds, “What happens in the simulators during exercises is very interesting. Suddenly the simulations are so much more real with crews on every bridge. Nobody knows how the tests will evolve which makes them considerably more realistic. In some test runs nothing unanticipated happens, while others can have unexpected developments. Both cases deliver valuable real-life knowledge. Interestingly, but not surprisingly, the simulator crews behave more politely, respecting other ships, crews and shore centres more, thus removing the partial computer game behaviour they normally show in simulations.”

How does this affect the simulator centres in the long term?

“There’s a lot of potential value in the increased cooperation between the different simulator centres. EMSN creates endless possibilities for SAR, education, research and large scale exercises to be conducted in ways we have not previously imagined,” says Reto.

What are the benefits for the maritime industry & transport chain?

“The simulations enable fine-tuning of the STM concept and solutions, saving much effort later in the implementation. “Compare it to developing a new car. A design error caught in the blueprint or in a CAD simulation costs almost nothing to fix compared to recalling millions of cars,” finishes Mikael.

MONALISA 2.0 developed and created a network of interconnected simulator centres in a number of EU countries – the European Maritime Simulator Network. This network enables testing of Sea Traffic Management in complex traffic situations, as well as other functions, like Search and Rescue, as a safer alternative to live testing. This EMSN will be used both to simulate varying traffic conditions and further test and validate other parts of STM that are not possible to test and validate in real life at this stage, such as area management.

“I t felt real as there were other real people involved”

In the first days of March 2016 the EMSN in STM activity 3 arranged a Search and Rescue (SAR) exercise with the network of simulators in Sweden, Norway and Finland. Anja Divkovic and Hanna Varvne from Chalmers were two of the participants on the on-scene coordinator ship Fure West. They are final year students of the Master Mariner programme at Chalmers University of Technology.

What roles did you have in the exercise?

“I was on the bridge of the on-scene coordinator ship acting as navigational officer and taking notes about all communication taking place,” Hanna explains. “I was on the same ship as co-navigator and managed external communication with the other ships. I was also involved in planning the search,” Anja adds.

How did you feel during the exercise?

“I was nervous before the exercise started, and the first hour was very intense. There was so much to do on the bridge. The twelve minutes it took us to come up with a search plan felt like forever. We had to discuss, call the Joint Rescue Coordination Centre, document everything and communicate it to the vessels involved. Once we had the search groups sorted and could start to supervise them, the courses, the distances and so forth, things settled down a little,” Anja describes. “Then we devised new plans and merged two of the search groups,” Hanna adds. “Initially we were a bit nervous but during the exercise we grew more confident. We had been preparing for a few days when we received the task, and the hours we had spent preparing really paid off.”

What did you learn during the exercise?

Hanna explains, “We practiced a critical scenario in a calm and secure environment, where we could test how we would have done things in a real-life situation.” “It was a great way to gain experience,” Anja adds. “The exercise felt real as there were other real people involved in the other countries who we did not know and whose reactions and behaviour we couldn’t predict,” Hanna says. “We had to trust them and that they had the knowledge and will to act according to our instructions. Just like in real life,” Anja concludes.

Did you act differently knowing there were actual people on the other vessels?

“Yes, it makes a huge difference, for example we updated the other crews with a situation report every 20 minutes throughout the exercise,” says Anja. “I was very content with my team’s effort. The group did an awesome job and things worked out very well.”

What was best thing during the exercise?

“I was very happy with the day – it was incredibly valuable,” Hanna starts. Anja continues. “Everyone should have the opportunity to be the on-scene coordinator. The exercise really challenges you as a person, the situation is stressful and you have to embrace a whole way of thinking in a SAR situation. This is one of the very best exercises we have done during the whole programme.”