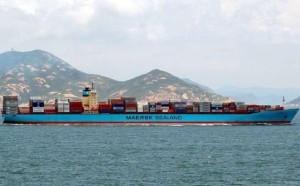 Port Said – Maersk Line has confirmed to TradeWinds that one of its containershipsdid run aground in the Suez Canal over the weekend. The Danish shipowner said the 8,160-teu Susan Maersk (built 1998) hit a sandbank on saturday while transiting the Egyptian waterway. “She was helped off the sand bank at 14hrs CET Sunday and has resumed her voyage. There are no damages in any way to the ship, crew or cargo,” Maersk Line said.

However, the shipowner denied that the Danish-flagged ship had been involved in a collision with another vessel. Earlier reports alleged that the containership may have struck the Liberian-flagged bulker “Margaret Oldendorff”, before it went aground.