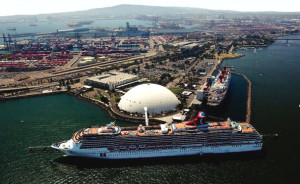 In a bid to keep the traffic it currently receives from Asia, the Port of Long Beach is redeveloping its infrastructure to provide competition to the soon to be expanded Panama Canal. Eight of the world’s biggest ports are based in East Asia, and the US West Coast has long acted as a gateway to the wider US for Asian trade.

However, the strategic position of Long Beach could be undermined when the redeveloped Panama Canal opens and allows shipping lines the opportunity to travel directly to the US East Coast with large loads.

CEO of the Port of Long Beach Jon Slangerup has said: “We are preparing for increasingly larger ships. The ships will be wider, deeper, and more containers will have to be unloaded from them faster.

“This is about future security, and the port is spending nearly US$5 billion in infrastructure investments in a 10-year plan because I literally do not know how much more trade will enter the docks.”

Currently, along with the Port of Los Angeles, Long Beach moves 14.7 million TEU per year, according to The Bulletin Panama. Redevelopments at Long Beach will see the port gain the capability to facilitate Maersk’s Triple E class vessels, as well as have a completely electrified terminal.