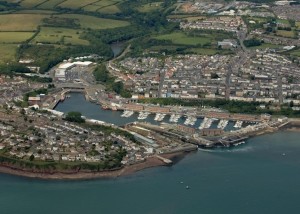 LNG operations are helping to keep hundreds of people employed at the UK’s Port of Milford Haven.

The port has two LNG terminals and nine Svitzer-built LNG escort tugs, replacing lost trade in what is traditionally an oil and gas-focussed operation.

Bill Hearst, Port of Milford Haven harbourmaster, explained: ” It’s true to say that refineries and the oil business is receding. If the LNG terminals weren’t there and we weren’t manning up to be ready for the LNG ships then it would mean a lot fewer jobs.”

The independently managed Dragon and South Hook terminals, owned by Petronas and Shell and Qatar Petroleum, Exxon Mobil and Total respectively, were established in 2009 after a three-year build. The money the port earns from LNG is invested back into the rest of the business.

However, all North West European ports have seen a drop-off in LNG trade in recent years, claims Mr Hearst. Milford Haven has seen up to 120 vessels a year call at the port before but is expecting just 40 this year.

Mr Hearst said this is a result of the 2016 Fukushima earthquake increasing the popularity of LNG in Japan combined with growing worldwide LNG provision.

He said: “I think all the North West European ports have found the same thing. It’s the whole market in Europe than attracts the gas, not Milford Haven alone. The terminals do their own work to market themselves but if there’s more price to be gained by going to Brazil, or China or Japan than that’s where it will go.”

Most of the infrastructure for LNG ships at the port was already in place for crude and LPG carriers. This meant few procedures were changed, but the port’s pilots underwent training to ensure they understand the behaviour of LNG vessels and to establish procedures such as speed and wind limits.

The tugs are used as an emergency response, either as an immediate break or to steer the ship up the channel. Pilots board the LNG vessels five miles outside the port to give them enough time to plan their entry into the port.

At its oil and gas trade peak, the port served four refineries onsite and one offsite. It now has one refinery, two oil storage units and two gas storage units.

Bunkering is not something which Mr Hearst can see happening at the port in the short or medium term, but Mr Hearst said he expected it to be implemented in the long term.