LNG infrastructure of filling stations and deployment in ships 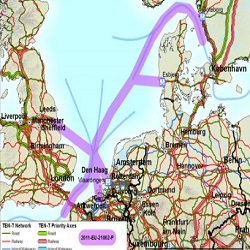 LNG infrastructure of filling stations and deployment in ships

The project is a strategic study taking the form of a pilot action in relation to the implementation of the Motorways of the Sea. It emerged as a project under the European Union Strategy for the Baltic Sea Region but its geographical scope has been expanded with the North Sea and the English Channel because of the trading between these areas and because of the Emission Control Area provisions setting more restrictive limits on sulphur and nitrogen oxides emissions from 2010, 2015 and 2016.

The project consists of feasibility studies on LNG (Liquefied Natural Gas) filling station infrastructure as well as a full scale pilot action. The study part of project will create a strategic decision paper relevant for central stakeholders, aiming at developing framework conditions for the use of LNG for ships and will validate a full scale pilot action aiming at demonstrating the LNG option as competitive fuel from shipping and an LNG supply chain points of view. The project further aims at harvesting positive environmental and climate effects.

The aim of the full scale pilot project is to modify the design of two new build vessels to a LNG propulsion system, a more environmentally friendly system, which is in line with the requirements of the revised Annex VI of MARPOL 73/78 adopted by The International Maritime Organization (IMO) in 2008.

This will be the first time that a Ro/Pax vessel of this size (1350 lane metre for trucks) will be built with LNG propulsion. The pilot action will be followed by an extensive measurement programme for validating its environmental and climate benefits as LNG contains no sulphur and emits 90% less NOx than traditional fuels and CO2 can be reduced by up to 25%.

The lessons learnt from the project are foreseen to have a wider benefit also for other geographical areas within the EU, demonstrating that LNG propulsion is achievable for a larger ro-pax vessel and could play an important role in further implementation of LNG in similar vessels throughout Europe on short international routes, as well as for domestic traffic.