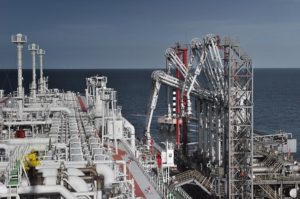 The Christophe de Margerie, a liquefied natural gas (LNG) carrier, has set a new record for crossing the Northern Sea Route (NSR) after it covered 2,360 nautical miles in seven days and 17 hours.

The Sovcomflot-owned was carrying a cargo of LNG from the Russian port of Sabetta to the Port of Tangshan in China.

During its crossing of the NSR, which ended when it reached Cape Dezhnev in the Bering Strait, it travelled at an average of 12.8 knots.

The Christophe de Margerie is the first in a series of 15 icebreaking carriers designed to transport LNG all year round.

Ior Tonkovidov, Executive Vice President of Sovcomflot, said: “This remarkable, safe passage across the NSR has requiregd the crew’s utmost attention and concentration.

“Ice conditions along the route were severe, especially in the East Siberian Sea, and the vessel experienced navigation in extended periods of limited visibility.

“The navigational and hydrographic situation within Arctic regions remains as challenging as ever.”