The third Annual LNG Bunkering Summit in Amsterdam closed its doors on the 28th of January. However the participants had the opportunity to gather industry specialists’ knowledge about every innovation in the field of LNG as marine fuel, to communicate with each other while exchanging ideas about the current problems in the implementation of LNG and to suggest possible solutions after critical thinking and collaboration. The invitation of this event was addressed to anyone is involved in bunkering and marine fuels and as a result the LNG Bunkering Summit was a great opportunity to bring together a wide range of organisations including ports, shipping operators, bunkering companies, oil and gas producers and solution providers. A great variety of issues, related to LNG marine fuel, were presented and analyzed during the conference. The main directions of the summit were the commercial viability of the use of LNG, the regulations that included environmental issues, the LNG infrastructure, the port case studies, the feasibility for ship operators and last but not least the funding opportunities. These six axis monopolized the interest of the meeting as would be expected. One of the most significant factors for every marine company as far as the choice of using LNG as a marine fuel or not is concerned, is the commercial viability of LNG. Despite the fact that the last four months the price of HFO is dropping in low levels, making its value competitive compared with this of LNG, the specialist of the market trends hold the view that oil is on an upward long-term price trajectory. In any case, gas is structurally 50% cheaper than oil and it also has at least 250 years availability, an element that constitutes strong advantage. At the same time we have to reckon in the fact that LNG infrastructure increases every year. In the figure below, we can easily observe a possible future bunkering option as it has been presented at the conference

Apart from the LNG fueled vessels that are already in market (i.e. m.v. Bit Viking) there will be many more the following years. The following table has been presented during the summit and is giving us some examples of maritime industry LNG technology installations. 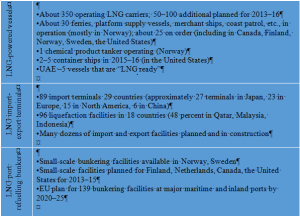 At this point, it was stated that, it would not be an excessive estimation that 1000 LNG fueled ships will be constructed until 2020. Summing up all the elements above, positive predictions were made regarding commercial viability of LNG.

The participants of the summit had the opportunity to observe the followind small scale LNG map created by GLE that provides useful information about: 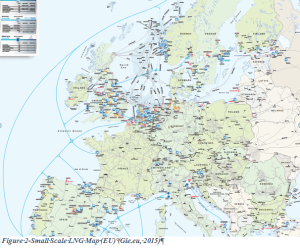 At the end of this article there are also four more figures that zoom the busiest regions of Europe. (UK, Netherlands- Germany, Spain, Scandinavia)

Another critical issue that have been extensively examined was about regulations and how they are expanding especially across Europe. It has always been considered that environmental issues play the most important role in construction and implementation of these regulations. It was officially stated that progressive tightening of emission controls mitigate away from oil-based fuels while LNG has already met the regulations for 2050. In any case IMO’s standards on the reduction of harmful emissionsin the shipping industry have been implemented since 1st January 2015 and in only 5 years they will become stricter. This is the reason that, as stated in the summit a number of times, there is a great turn in LNG as marine fuel.

The port case studies, that have been presented, concerned major European ports and offered to the participants an opportunity to understand how LNG bunkering infrastructure is developing along with current feasibility projects. An engaging element was the fact that at the bunkering infrastructure and especially in safety is given a lot of attention by producing innovative ideas about how to make LNG a safe solution for every port in spite of the great number of daily bunkerings. There is no better example than GTT company which offers membrane technologies that are already available for building storage facilities of small to medium size (typically 5.000 m3 to 30.000m3 or more). 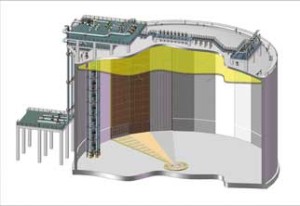 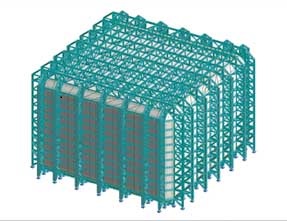 Figure 3-Land Storages located in port areas or by the sea and connected to an import / export jetty (GTT, 2015)

As far as feasibility for ship operators is concerned, shipping operators explain to the participants the business case for conversion. Among a wide number of useful information, we underlined that only 20% of vessels, that are currently used, are capable of conversion in LNG fuelled vessels. Practically this statement means that in order oil fuelled vessels to be replaced with LNG fuelled, there should be an increasing trend in ordering new buildings the following years. In the next figure, we can notice four European vessels that have converted to LNG fuelled. 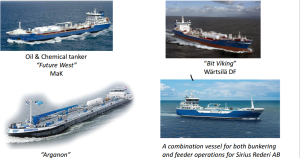 At this point we should also refer that some practical issues have also been discussed during the summit such as the funding opportunities and especially how European organisations and workgroups are applying and securing funding. Relatively, the project manager of European Commission, Miss Sofia Papantoniadou, explained that there will be plenty european programmes that will support financially both ship owners and port authorities in their effort to introduce LNG in maritime world.

To sum up, it can easily be realized that the following years there will be a set of actions that will lead at the same point. Some of them are the rapid development of technology relative with LNG, the fact that the regulations that refer to emissions become stricter and there is an increasing trend both in orders of LNG fuelled vessels and in construction of proper port infrastructures for bunkering processes. However, there is a lack of vocational education for people who are involved with LNG in any field (in production, in supply chain, in ports and on board). As a result, On The MOS Way educational project would be a sheer opportunity for any employee in marine sector who is relative with the usage of LNG. Moreover, considering all the information above, we can notice that a great number of marine companies will invest significant amount of money in the field of LNG the following years. It is more than logic that there should be properly educated employees who will have the capability of using these investments.