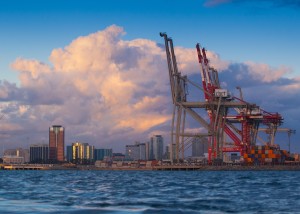 Although some skeptics may have written it off, LNG bunkering is ultimately going to be one of the key solutions to comply with the International Maritime Organization’s upcoming 2020 global sulfur cap, as there won’t be enough gasoil and scrubbers to meet demand for 0.5% sulfur-compliant marine fuels, some industry sources said at the 10th International Fujairah Bunkering and Fuel Oil Forum, or FUJCON, this week.

An increasing number of organizations are joining industry coalitions to accelerate the use of LNG bunkering in the shipping industry, the latest being the announcement on Wednesday of three new members — JAX LNG, Petronet LNG, and Toyota Tsusho Corp. — added to the SEA/LNG coalition. SEA/LNG has a memoradum of understanding with the Society for Gas as Marine Fuel, an organization that also promotes the development of natural gas as a marine fuel, with 108 members according to its website.

It was important for industry players who are not members of SEA/LNG and SGMF to come forward and recognize LNG’s growing importance, the sources at the forum said.

“2020 creates a new reality, creating potential threats, but also an opportunity that can help reposition shipping. For the brave, there is an opportunity to take this and do something different. When Winston Churchill decided in 1911 to move the British Navy from coal to oil, that was a brave move, but he did it because he saw an opportunity to create a more efficient fleet,” Lauran Wetemans, general manager of downstream LNG and LNG fuel division at Shell said, adding, “we believe that 10%-20% of all bunker fuel oil could switch to LNG by 2030.”

“Shell will continue to offer a variety of solutions to different customers and regions. But we do see a great opportunity for LNG,” said Wetemans.

“I think scrubbers and low sulfur fuel oils will suffer from too high a demand, and then some of the ship owners and operators would realize that if they knew, they wouldn’t have turned their back upon it,” Abdoulaye Diouf, market development manager and lead at LNG process operations at GTT, said on the sidelines at FUJCON 2017.

“LNG is definitely the future marine fuel, as cleaner alternatives receive more attention to meet stricter environmental regulations,” Gulf Petrochem’s group director, Prerit Goel, said on the sidelines of the event. Most LNG variants have no detectable sulfur, and emission of particles and nitrogen oxide by LNG-fueled vessels are considerably lower than that of vessels using other marine fuels.

“In future, we could also consider becoming a ship-owner that carries LNG or a player that supplies LNG bunkers,” he said.

Spot LNG prices are expected to come down as supply availability grows, Fereidun Fesharaki, charmain of Facts Global Energy (FGE), said, adding that by 2020, LNG supply additions in Australia and the US Gulf Coast will increase the current global supply by more than 40%.

This could spell good news for ship-operators promoting them to switch to its use, the sources said.

Commoditizing LNG and expelling myths around its safety aspect would also spur it use, they said.

Oil contracts are on a short-term basis, while LNG contracts have a longer term tenure — usually around 15-20 years — as high infrastructure costs mean suppliers have to get commitments from purchasers before investing in LNG facilities, he said.

Although LNG still is not a commodity as oil is, it is moving in that direction, said Fesharaki.

Incentives and exemptions will promote the use of LNG, Wetemans said. In Europe, for example, the Connecting Europe Facility Fund has provided incentives to build the early infrastructure for LNG use.

“Ships will bunker where it is cheapest, but if you look at the top 25 bunkering ports worldwide, most of them have indicated plans for LNG bunkering and about 10-13 of them are at an advanced stage already,” he said.

In Asia, for example, Japan has already done a feasibility study for the development of an LNG bunkering hub at the port of Yokohama, located on the Pacific side, as it serves as the first or last bunkering base in the Asian side of the Trans Pacific route.

The Maritime and Port Authority of Singapore, for example, awarded last year two LNG bunker supplier licenses to Pavilion Gas Pte Ltd. and a joint proposal of Keppel Offshore & Marine and BG Group plc. “MPA will work with the two license holders to develop the necessary infrastructure for them to begin supplying LNG bunker to vessels in the Port of Singapore by early-2017,” it had said in a statement in January 2016.

In October 2016, MPA and Singapore LNG Corporation Pte Ltd. signed an MOU to collaborate on an interim truck-loading facility, which will be used for LNG bunkering.

An international focus group formed in 2014 to co-operate on LNG bunkering, which initially comprised the ports of Singapore, Rotterdam, Antwerp and Zeebrugge, was expanded in October 2016 to include the Port of Jacksonville, Norwegian Maritime Authority, the Ministry of Land, Infrastructure, Transport and Tourism, Japan, and the Ulsan Port Authority, South Korea.