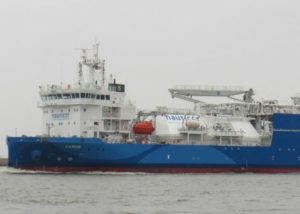 Kairos recently completed the second LNG ship-to-ship bunkering operation at the Port of Rostock’s LNG terminal, where the cooperation between Nauticor and Novatek Green Energy will focus on initially. Photo: Nauticor

LNG bunkering infrastructure will be developed in ports along the German Baltic Sea coast as part of a new partnership.

Nauticor and Novatek Green Energy have signed a Letter of Intent (LOI) to work together in developing a joint LNG supply infrastructure in the Baltic Sea range. They aim to further develop the marine LNG bunkering market by delivering via both bunker vessels (ship to ship bunkering) and trucks (truck to ship bunkering) with special focus on the development of such infrastructure in ports along the German Baltic Sea coast.

Gregoire Hartig, senior business development manager of Nauticor, said that “this cooperation combining the strengths of a leading marine LNG provider with those of one of the world’s largest LNG producers will benefit those companies that chose using LNG as fuel as it is improving the availability of LNG in a growing number of locations.”

Novatek has LNG production capacities in Yamal and Vysotsk which would be suitable to satisfy the growing demand from shipping, logistics and industry for alternative fuels in Central and Western Europe.

Nauticor has extensive experience in setting up bespoke and competitive supply chains for LNG as marine fuel by truck and ship in Northwest Europe. The Hamburg-based company started bunkering operations with the world’s largest LNG bunker supply vessel Kairos at the beginning of 2019 and is now the vessel’s sole operator. In January, Kairos, owned by Babcock Schulte Energy and co-financed by the EU’s Connecting Europe Facility, took part in the first LNG ship to ship bunkering operation in the Port of Rostock.

Mr Hartig added: “The commitment of a strong player like Novatek, to support the development of small-scale LNG infrastructure in the Baltic Sea and beyond, underlines Nauticor’s efforts to develop the last mile of the LNG supply chain from the terminal to the end-customer. The Rostock LNG terminal is obviously an important addition to that and a natural starting point for such a cooperation.”