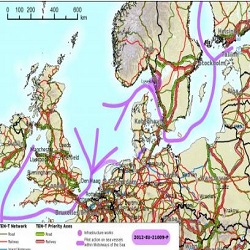 The aim of the Global Project is implementing three pilot actions for LNG, methanol and the use of scrubbers. These pilots look at meeting the sulphur legislation in 2015 in the Sulphur Emission Control Area and support the development of a competitive and environmentally sustainable shipping sector in the Baltic Sea. The Action is composed of works and studies. The works aim at the implementation of an LNG bunker supply infrastructure for the use of LNG at the Port of Brofjorden in Sweden. The technical studies aim at the deployment of new LNG technologies in full scale Pilot Actions in vessels in the Baltic Sea and in the North Sea. The Action will establish LNG bunkering infrastructure including the components required from the terminal to bunker vessel, and from the bunker vessel to the LNG fuelled vessels. The deployment of new LNG technologies will result in demonstration of full scale solutions of vessels in commercial operation in the Baltic Sea and in the North Sea, as well as design recommendations, recommended best practices for operation, and suggestions for development of rules and regulations. The Action will additionally investigate financial mechanisms to support ship-owners/operators in converting their fleets to new technology.