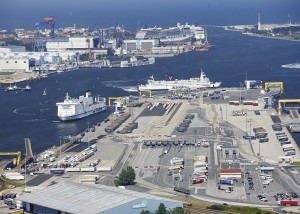 Bomin Linde LNG GmbH & Co. KG has conducted the first bunkering of a chemical tanker with LNG at a German port. Earlier this month at the Port of Rostock, the Fure West vessel received chilled natural gas.

A total of four LNG trucks were unloaded onto the vessel, operated by Swedish shipping company Furetank AB.Lars Höglund, Furetank’s managing director, said: “We are happy that we are able to bunker LNG in an increasing number of ports, including Rostock. Jointly developing the LNG market is the basis for successfully establishing LNG as a ship fuel.”Fure West became one of the first tankers to run on LNG when it was retrofitted back in 2015. Since then, its owners Furetank expressed its intention to extend its fleet of LNG-powered tankers following the order of six LNG-fuelled new builds with the Gothia Tanker Alliance.Jens Aurel Scharner, managing director of Rostock Port, believes that the successful bunkering operation will help to establish Rostock as a prime location for alternative ship fuel supply.He concluded: “We are pleased to see that not only supply by truck, but also by bunker vessel might be an option in the long run.”