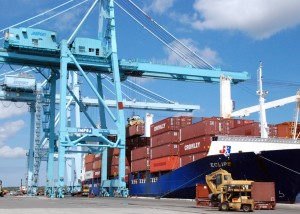 Construction has begun on a new LNG facility at JAXPORT’s Talleyrand Marine Terminal in Jacksonville, US, which will serve new LNG vessels currently being built for the US mainland-Puerto Rico trade route. The Crowley Maritime Corp and Eagle LNG Partners LNG bunker fueling facility will serve Crowley’s new Commitment Class, LNG-powered, combination container/Roll-on Roll-off (ConRo) ships.“The start of construction marks a milestone as we continue making progress with our partners, supplier Eagle LNG and Chart Industries, manufacturer of cryogenic storage tanks,” said Matt Jackson, Crowley’s vice president, LNG.“LNG will provide a cleaner, efficient fuel source for our industry-leading Commitment Class ships, and our new JAXPORT bunkering terminal will support efficient operations with state-of-the art technology for bunkering operations.”Chart Industries is on schedule to deliver two of its new, 1-million litre Decinske Giant cryogenic tanks for LNG storage at the site in March 2017.Including the Jacksonville project, Crowley is investing more than US$550 million in the two new, innovative ships, along with a new 900-foot pier, three new gantry cranes and a multitude of terminal improvements at its Isla Grande terminal in San Juan, Puerto Rico.Crowley’s LNG and logistics groups are supporting construction of the Jacksonville facility by providing engineering expertise and transportation solutions for the equipment at the site.“Because of its multiple benefits, including being cleaner for the environment, we expect LNG demand for ship fuel to increase to 30 million tonnes a year (MTPA) by 2030. We recognise Crowley’s leadership as an early adopter of this fuel,” said Eagle LNG President Sean Lalani.The ConRo ships will begin service in the second half of 2017 and first half of 2018.