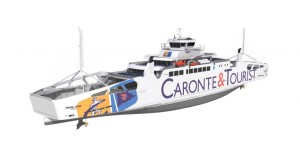 Norwegian designer LMG Marin, a unit of Singapore’s Sembcorp Marine, signed a contract with the Italian shipowner Caronte & Tourist for the design of an LNG-fueled ferry.

The vessel will be built by Sefine Shipyard in Turkey, LMG Marine said in its statement, adding that, when delivered in 2018, it will be the first ferry in the Mediterranean Sea to operate on LNG fuel.

The LMG 290-DEG design, which is 133 meters long and 21.5 meters wide, will have a capacity for 290 cars on two vehicle decks, and 1500 passengers. The propulsion will be based on a gas-electric system using 3 dual-fuel engines, LMG Marin said.

The vessel has been optimized to operate across the Strait of Messina between Villa San Giovanni and Messina in Sicily, which is an area prone to very high current. The ferry will also be to operate on more open routes such as to the Aeolian Islands due to its EU Class B certificate.