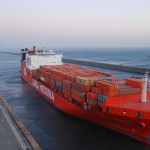 With ground fighting, aerial bombardments and migrants fleeing the country, Libya seems to be in an ever-worsening crisis. But, in recent days, despite it all, ships have continued to arrive at the ports of this North African country. A spokesperson for the National Oil Corporation, Mr. El Harai is quoted by Reuters listing one oil tanker leaving the Es Sider oil terminal, near Benghazi, last Thursday, followed the next day by another tanker headed for Italy. The website “Marine traffic” had the oil tanker Acs Bright arriving at Ras Lanouf on the afternoon of Sunday, August 24 and leaving Es Sider yesterday, bound for Trieste. Even the container terminals are operational, with shipping lines that connect Libya to Italy, such as Messina, Arkas, Tarros, Brointermed, Msc, Cma-Cgm, Seago, Medcrossline, still sending ships to the main ports of Misurata, Tripoli, Benghazi and Al Qoms. Just yesterday, a ship of the Genoese company Messina was in Tripoli. Doing business in Libya, however, is getting increasingly difficult. “It’s a disastrous situation, but we’ll keep at it till it gets too bad” explains ship owner Ignazio Messina. “We’ve had to reconfigure the holding space as freight has taken a hit.”

Arnaldo Compagnucci, freight agent for Arabital, also expressed his dismay saying, “the country’s at a standstill, but no one knows why”. Arabital’s Libyan sources cannot find a cause for the present unrest, which, in turn, paradoxically, allows for guarded optimism that the situation may improve: “I’ve heard many rumours, but the only hard fact are the mysterious, night-time, surgically-executed bombings. Even the recent take-over of Tripoli’s airport by the Misurata militias is useless, the facility being so run-down it will remain closed for years”. Meanwhile chances for trade have dwindled to a minimum. “To cover the risks, shipping lines want to impose surcharges. Figures of up to $150 per TEU in surcharges are being considered. The problem is that payments are not forthcoming and containers sit in ports: the banks are only operating for domestic transactions. Containers are released only when the receiver shows up with cash or – in rare cases – they possess capital abroad.”

Also, according to Platt, an energy-sector news agency, since the country’s ship owners are increasingly reluctant to allow their ships to stop at Libyan ports. Some, fearing risks to the loading and unloading operations are asking for an increase in freight rates, as much as 20 percent more than what normal rates have been. Crude oil production, which makes up a sizable portion of Italian supply, has scaled down dramatically since the fall of Gadhafi: from 1,6 million barrels a day to as low as 100,000 barrels during the course of 2014. In recent months it has rebounded, thanks in part to ENI’s business (about 250,000 barrels a day from off-shore platforms) and had recently topped 500,000 barrels. “ In June,” Compagnucci recalls, “we had managed to sign new contracts, the economy was picking up. The contracts are still out there, waiting for better times. Local operators are moderately optimistic and next week I have a meeting with our clients in Libya”.