Latin America and the Caribbean: regional port throughput falls 0.9% in 2016 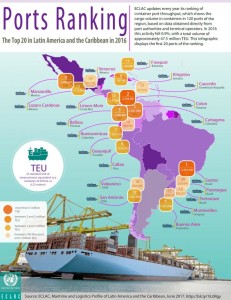 The throughput of containerized cargo in the ports of Latin America and the Caribbean fell 0.9% in 2016, according to data released today by ECLAC. This regional average continues the negative trend of deceleration that has been observed in the last few years and represents the biggest loss since the 2009 crisis.

Data confirms two trends seen in the region in recent years: an overall steepening of the deceleration of foreign trade in container terminals and a high degree of heterogeneity in this activity’s growth rates within the region.

The total volume of activity in 2016 reached approximately 47.5 million TEU*. The first 40 ports in the ranking represent nearly 90% of operations with this type of cargo in the region. The following 100 ports move the remaining 10% (4.4 million TEU).

Container port traffic on a global level also showed little dynamism in 2016. According to estimates published by Alphaliner, the volumes in the world’s top 100 container ports rose just 1.8% in 2016, to 555.6 million TEU.

However, by the side of exports, Latin American and Caribbean seems to be returning to a path of growth. In fact, after four consecutive years of contraction, in the first quarter of 2017, the value of goods exports increased 17 percent year-on-year, having contracted 2.9 percent in 2016. The recovery was driven primarily by a rebound in commodity prices, according to an analysis conducted by the Inter-American Development Bank (IDB) using detailed data for 25 countries in the region (see table below).

Regarding to 2016 throughput performance in container ports, the data compiled by the Economic Commission for Latin America and the Caribbean (ECLAC) points to great heterogeneity, both at a subregional level and by country. In 2016, the east coast of South America experienced a decline in activity (-3.7%), which was more pronounced than in 2015 (-0.7%) due to the steeper drop recorded in the ports of Brazil and Argentina. Meanwhile, the west coast shows a rebound in container activity (4.5%) when compared with the growth rate seen in 2015 (0.4%), due to the positive evolution of port terminals in Chile (4.8%), Peru (8.4%) and Ecuador (4.5%). At the same time, Central America went from a positive growth rate in 2015 (3.4%) to a 3.5% decline in total volumes in 2016, mainly due to reduced throughput in Panama (-9.1%). 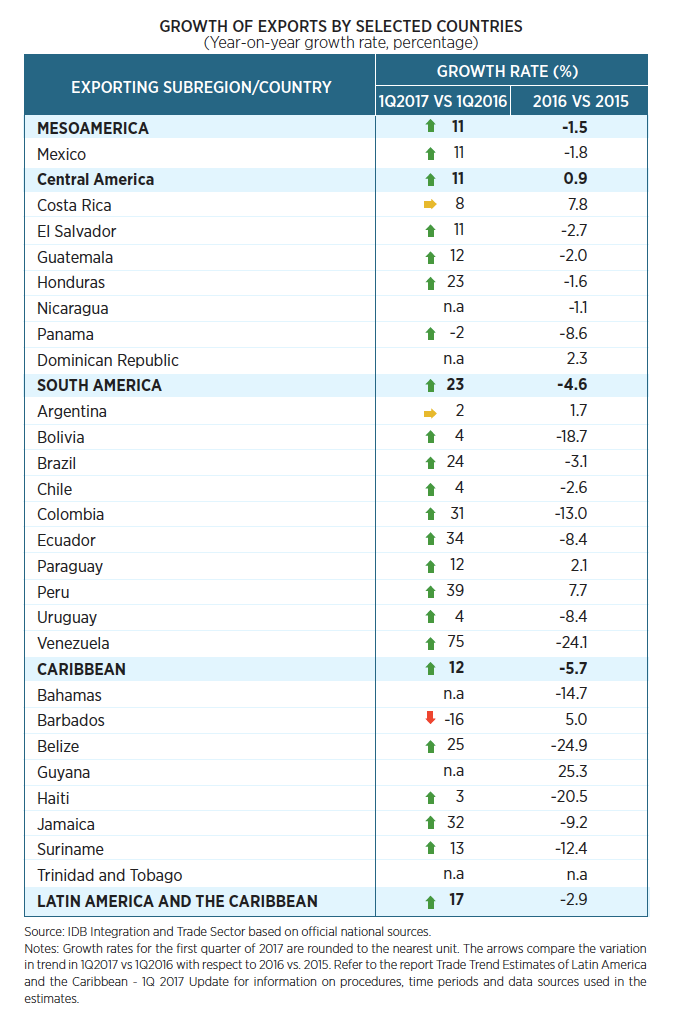 As in the past, the drivers of growth, deceleration or decline in activity in individual ports vary. For example, the ports of Callao in Peru (8.1%), Guayaquil in Ecuador (6.9%), Caucedo in the Dominican Republic (11.1%), and San Antonio (10.0%) and Lirquén (60.1%) in Chile, showed the highest rises in volume due to the success of their projects and their commercial management.