Larger vessels vs the community 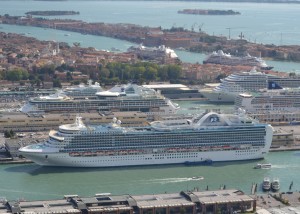 The green light given to a new terminal development in Venice has drawn criticism from the cruise industry over what has been called a totally ‘unworkable solution’.
Venice’s proposed new terminal between the lagoon and the open sea at the Lido inlet intends to provide a large mooring area for large ships, including cruisers, so they can dock out of sight of the city’s 20 million tourists.
The project instrumented by the Duferco steel group, has been given approval by the Ministry for the Environment’s EIA Commission, albeit with a few minor amendments.
Venice Passenger Terminal’s (VTP) new chief has been very vocal in his opinion that it is the not the right solution for the city.
“Everyone is clear that a solution needs to be found to accommodate larger vessels calling at Venice but it’s a complex situation”, the new DG of VTP, Galliano di Marco, told GreenPort.
“Commercial ships and cruise ships need to get better working together in future in order to guarantee development for both sectors. To start with people in Venice need to realise how complicated and expensive it is to take things forward, it’s not just a case of moving the terminal.”
“Tourism is the lifeblood of our glorious city. If we relocate the terminal and the cruise ships we create other problems with getting passengers to where they need to be and we will not be able to accommodate new vessel calls because we will be competing with commercial ship calls.”
At the moment, larger ships, including cruise ships have to sail along the Giudecca Canal close to the Doges Palace and Saint Marks Square to reach the passenger terminal. There can be as many as 600 moorings per year which looks pretty awful to residents and tourists on dry land.
Not to mention the pollution they rain down on the city. But Mr di Marco said that the pollution side of the problem is much more easily resolved. VTP is working with the cruise operators to accommodate their need for LNG. Many of the big cruise operators that call at Venice (such as Carnival, MSC, Royal Caribbean and Costa Crociere, part of the Carnival Group) are going down the LNG route when it comes to their newbuild ships.
But although these ships are better for the public health because they are cleaner, they are bigger, bringing us back round to the argument at hand, which is how to accommodate them.
Back in 2012, the Clini-Passera decree said that an alternative route had to be found for large vessels and there are only two options, moving the cruise terminal or digging a larger canal to reroute the ship’s passage into the terminal.
Tricky issue
There were some other projects on the table but these seem to have gone by the wayside.
VTP favoured the Sant Angelo-Contorta which was instrumented by ex-chief general manager of the Venice Port Authority, Paolo Costa and the mayor, Luigi Brugnaro.
The project involved digging a new canal through the shallow waters of the lagoon and it seems to have fallen down during the developmental planning stages because of its environmentally sensitive nature.
VTP said though that the need to preserve the environment needs to be balanced with business need and the fact that the project will let larger ships call. Larger more modern ships are in themselves more cleaner than their predecessors.
Mr Di Marco said that the right balance is possible going forward.
“We want to strengthen Venice’s particulars as a home-port,” said Mr di Marco.
This means that out of the 1.5m cruise passengers that visit Venice each year, VTP wants 60% to stay at least one night spending money in the city as they do so. But more importantly, being a strong home-port means that increased direct, indirect and induced returns will be combined with high levels of employment generated by homeport operations.
“By digging a new canal, we can tackle many problems at once. The need to accommodate larger ships and thereby pollution, re-routing the cruise ships away from the main tourist attractions from an aesthetic point of view and allowing Venice’s tourism industry to grow even further, which of course feeds the economy of the city itself,” Mr di Marco added.
So what are the options going forward because there’s nothing else on the table yet?
The trouble is, as Mr di Marco points out, there is not a one size fits all solution for everyone.
But he said that VTP is working on a different application with the cruise companies. The application will be submitted to the new general manager of the Venice Port Authority in due course so that the commercial arm and the cruise arm can work together to find a more workable solution for everyone.