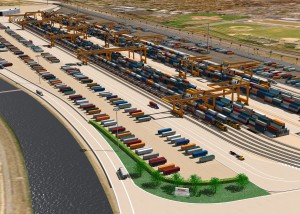 A superior court judge has put a stop to a $500m rail yard project near the Port of Los Angeles due to concerns about the amount of truck traffic and air pollution it would bring to the area.

The project involved BNSF Railways building a185-acre rail yard, called Southern California International Gateway, on the land in the Wilmington area of Los Angeles, and was expected to increase efficiency at the Port of Los Angeles and Port of Long Beach.

Under the new plan, trucks moving cargo from ships to rail lines would only have to drive four miles, as opposed to almost 20 miles on their existing route.

The plan drew criticism from community members and environmental groups, however, who argued that putting a railyard between Wilmington and the Lower West Side of Long Beach would bring increased truck traffic and air pollution not only to nearby schools, but also to other community hubs located close to the project site.

It was estimated the project would have drawn as many as 8,200 trucks per day to the area, which is already dealing with some of the worst air quality in the country. Trucks working for the ports of Los Angeles and Long Beach have been identified as the primary source for particulate pollution in the area.

“This is a huge win for Long Beach, and in particular for our Westside residents, who would have been dramatically impacted by this proposed project,” said Long Beach Mayor Garcia in a statement.

“This is just not the right location for a rail yard,” added Morgan Wyenn, a staff attorney with the Natural Resources Defense Council, one of the organisations that filed a suit against the rail project. “Anytime you concentrate that many trucks in one small area, the air pollution for that area is going to increase no matter the way you look at it.”

Those behind the project will now have to find another way to approach the project, that meets stricter environmental guidelines.

In a statement, the Los Angeles City Attorney’s Office said:”We are disappointed with the court ruling that delays or deprives the region of many environmental benefits and both ports of Los Angeles and Long Beach of important rail infrastructure.”