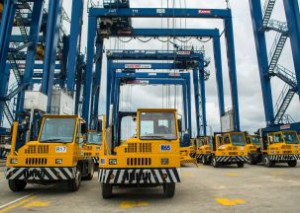 ICTSI says the expansion of terminal operations currently underway at MICT and SBITC has required an increase in the existing fleets. The new Kalmar units will help increase the efficiency of the loading and unloading of containers and cargo in the ports, as well as assisting with anticipated growth.

Two of the Kalmar Gloria reachstackers (Kalmar DRG450-60S5M) and three Kalmar empty container handlers (Kalmar DCT80) will be supplied to MICT by the end April 2015. All Kalmar Ottawa terminal tractors will be delivered to Manila and SBITC’s new container terminal in Zambales during the third quarter. The delivery of Kalmar E-One2 RTGs is scheduled for completion by end-November 2015.

Elsewhere, the order from GICEP is a repeat order – this is the third order for Kalmar cargo handling machinery placed by GICEP since 2013 – to be delivered to six different locations in Algeria.

Kalmar will deliver 11 reachstackers and 16 forklift trucks to be used by the ports and logistics centres of Algiers, Skikda, AILC, ACS, Djen Djen and Tenes. GICEP groups together the public ports in Algeria, handling approximately 800,000 teu of containers annually. Their operations also include stevedoring and general cargo handling.

The Kalmar DRF450-65S5 reachstackers have a lifting capacity of 45 tonnes and are able to stack containers five-high, while the DCE150-12 and two DCE160-12 medium range forklift trucks have with 15-16 tonne capacity at 1,200mm load centre.