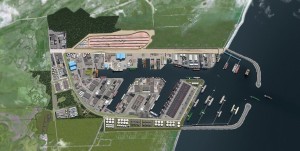 A joint venture (JV) including the Port of Rotterdam has signed an agreement with dredging company Van Oord Dredging and Marine Contractors for the development and construction of a new multipurpose port in Brazil.
The JV Porto Central S.A., which also includes the Brazilian logistics company TPK (Terminal Presidente Kennedy) Logística, was established in April 2014 for the development of the greenfield Porto Central in Espírito Santo to handle various types of cargo including containers.
The project will be carried out in three phases, the first one including the incorporation in the designs and plans of conditions and requirements of the necessary permits and approvals.
The second phase will involve optimisation of the construction methods and schedules, while construction works will start during the third and last stage of the project.
Upon the project’s completion, the deep-water port is expected to have a draft of up to 25 m and a 300 m wide access channel.
According to a company statement, Porto Central will be able to receive very large container ships (VLCS) and ultra large container vessels (ULCV) with a capacity of over 15,000 teu.
The JV said in a statement: “Porto Central and Van Oord have established an integrated team, which works on a fast-track process from conceptual design to construction and operation of the port.
“This development approach enables an early identification of risks and opportunities and leads to optimised designs and work methods, gives flexibility to make adjustments according to the port’s clients’ needs and ensures an early start of port operations.”
The company claimed that, in the area of port development, the deal represents the first time this type of agreement in being executed for a complete greenfield port project.
In 2014, the Port of Rotterdam Authority said in a statement that its main role would be “providing its extensive expertise and knowledge in the field of port development”, adding that an investment decision was going to be made only at a later stage.