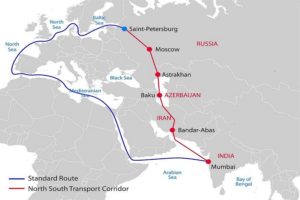 Baku, Azerbaijan  – At a meeting of the International North-South Transport Corridor (INSTC) coordination council in Tehran, it was announced that capacity on the corridor would be increased.

Iran’s Minister of Roads and Urban Development said that the increase would be achieved by expanding railway and port infrastructures.

He added that member states had agreed to create a joint company, including government representation, for the corridor to increase capacity, subject to the necessary political will to proceed with the plan.

The International North-South Transport Corridor (INSTC) is a 7,200 km long multi-modal network of ship, rail, and road routes for the transport of freight between India, Iran, Afghanistan, Armenia, Azerbaijan, Russia, Central Asia, and Europe. The objective of the corridor is to increase trade connectivity between major cities such as Mumbai, Moscow, Baku, Astrakhan, Tehran, Bandar Abbas, and Bandar Anzali.

The aim of the corridor is not just to increase trade between member countries, but also to standardize tariffs and customs duties.

The foreign ministers of Romania, Azerbaijan, Georgia, and Turkmenistan have this week signed a declaration for the promotion of a multimodal corridor for the transport of goods between the Black Sea and the Caspian Sea (Caspian Sea – Black Sea International Transport Corridor project – ITC-CSBS).

It will link the ports of Constanţa (Romania), Poti (Georgia), Baku (Azerbaijan) and Turkmenbashi (Turkmenistan).