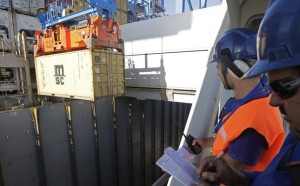 New Delhi – After months of deliberations, India’s shipping ministry has prepared a policy draft that seeks to allow foreign ships to operate along the country’s coast – a business that is reserved for Indian-registered ships – following demands from stakeholders such as container shipping lines, terminal operators and state governments. The stakeholders argued that easing the so-called cabotage rule was imperative for the development of coastal shipping and to cut dependence on neighbouring hub ports such as Colombo, Singapore and Dubai to send and receive cargo shipped in steel containers, thus saving time and costs for India’s exporters and importers. Cabotage refers to the carriage of goods between two ports in one country by ships registered in that country or so-called national flag ships. But, instead of an omnibus relaxation of the rule, the shipping ministry has proposed selective easing by allowing foreign container carriers to carry export-import (EXIM) containers and empty containers on India’s eastern coast between Kolkata and Chennai ports for a three–year period. In return for this concession, the shipping ministry plans to levy $50 per twenty-foot equivalent unit or TEU from foreign container carriers for moving EXIM containerized cargo and $25 for transporting empty containers along the eastern coast ports.

The proposed relaxation also covers specialized ships such as roll-on-roll-off (RO-RO), Hybrid Ro-Ro, Ro-Pax, Pure Car Carriers, Pure Car and Truck Carriers, LNG Vessels and Over-Dimensional Cargo or Project Cargo Carriers. Indian fleet owners do not own or run these types of ships, but they have the potential to shift cargo away from roads and rail to coastal shipping. Experts have criticized the ministry’s proposal for a selective easing of the cabotage rule, with one of them saying that it was a “half-hearted step”. It is often argued that India does not have adequate domestic container fleet to meet the rising requirements of container trade. India has only 16 of them plying on local routes. This is particularly so when the government is looking to ship containers directly; these are now sent via overseas hub ports by setting up terminals in India that can facilitate this task by allowing bigger vessels to dock. After analysing EXIM data and empty container cargo movement in India, the shipping ministry defended its proposal to go for selective easing of cabotage, saying that ports on the country’s eastern coast rely more on trans-shipment of containers through neighbouring hub ports to send and receive cargo, while ports on the western coast are mostly gateway ports and, hence, does not require trans-shipment. The mainline call versus trans-shipment ratio for Indian EXIM container cargo is 80:20. Simply put, 80% of EXIM container cargo is carried by the mainline vessel of foreign container shipping lines calling at India’s ports. The rest 20% is trans-shipped through foreign ports some on foreign feeder ships and some on Indian feeder vessels. In July-December 2014, 4.147 million EXIM containers were handled by ports on the west coast, while this number was 1.353 million on the east coast.

Thus, the ratio of contribution of west coast ports to east coast ports in such cargo movement is 75:25. During the same period, 3.929 million EXIM containers were moved by mainline ships of foreign lines on the west coast while 217,836 were trans-shipped to foreign ports. On the east coast, 466,626 EXIM containers were carried by mainline foreign ships, while 886,846 were moved through trans-shipment. Thus, the ratio of mainline calls versus trans-shipment of such cargo on the west coast was 95:05 while on the east coast the ratio was 34:66. “Thus, there does not appear to be a convincing argument in favour of uniform relaxation of cabotage restriction for EXIM containerized cargo and empty cargo along the entire Indian coast. At best there is scope for such relaxation on the east coast to promote development of aggregation hubs as well as greater gateway calls at the ports on the eastern coast. This may also encourage aggregation of containers from other neighbouring countries,” the shipping ministry wrote in the policy draft. By the ministry’s own admission, a cabotage relaxation can at best be an interim measure.

And, for this, the government has to pitch in with the requisite support. Indian shipping is dogged by numerous taxes, which is not the case with foreign shipping lines. While most components of the cost of a ship are international, the taxation and overheads or management costs in India impact the competitive edge of Indian shipping companies both in international as well as domestic/coastal trade. Even if a shipping company registered in India was to follow some of the best market practices in systems and operations to keep costs under control, the taxes would make operations unviable. The operating cost of Indian registered ships is about 35-40% higher than foreign-flagged vessels, primarily due to the stiff taxes applicable to Indian ships. Despite the introduction of the tonnage tax—a levy based on the cargo carrying capacity of a ship—in India from April 2004, the average tax rate paid as a percentage of profit is much higher in the case of an Indian shipping company, compared with a company operating in Singapore. This anomaly needs correction to provide a permanent solution to India’s bid for developing a strong coastal shipping industry.