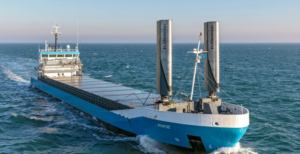 In today’s world, the seamless and sustainable transport of goods and passengers is a key enabler for growth and prosperity. 90% of everything we consume arrives by sea. Without any doubt, shipping is at the very heart of global trade. Despite the huge trade volume, international shipping accounts for approximately 2% of global CO2 emissions1. This attests to the extremely high carbon efficiency of shipping.

For many years, there have been significant improvements in engine efficiency and hull design, and the use of ships with larger cargo-carrying capacities and smaller installed engine power have led to an increase in fuel efficiency and a reduction in emissions. The more efficient use of data has enabled the optimisation of operations, which has also led to further reductions.
According to estimates by the environmental NGO, the International Council on Clean Transportation, the shipping industry reduced its total CO2 emissions between 2008 and 2015 by about 11 per cent2, despite a significant increase in maritime trade during the same period. This indicates that the sector has already improved its carbon efficiency by as much as 30 percent over the past decade.

Shifting goods from land to sea will reduce CO2 emissions

In terms of CO2 emissions per tonne of cargo transported one mile, shipping is recognised as the most efficient form of commercial transport. Compared with road and air transport, shipping stands out as the best performing. (see table below). In the same way as shifting transport from road to sea, shifting passenger transport from air to sea will produce even larger reductions of GHG emissions. This is a real alternative in short distances such as straits crossing or inter-island trades where shortsea shipping competes in total transit time (city to city) with regional airplanes.

The Swedish Environmental Institute (IVL) made a comparison between different modes of transport and looked at the CO2 performance per tonne/shipment on the route Rotterdam-Gothenburg. In the graph below, the two lowest bars (a 6,000 DWT container feeder and a 10,000 DWT RoRo carrier) are typical ship types which mainly operate in short sea shipping. Transport by sea is in almost all comparisons much more environmentally-friendly than by rail (diesel as well as electric EU-25 mix) or road (Euro IV engines). The types of energy (electric EU-25 mix e.g.) and engines (Euro IV e.g.) for the different modes of transport mentioned in the table are the most common ones in the European transport sector today. These numbers were also presented by the IVL at the European Parliament’s hearing on maritime emissions on 21 January 2020. 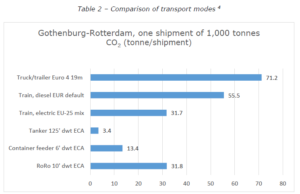 Short sea shipping could adopt various zero-emission technologies and fuels aimed at the decarbonisation of the industry. The development of hydrogen and other alternative fuels, as well as electric vessels with the use of batteries are the first steps on the pathway to decarbonisation. Short sea shipping could provide a way forward towards decarbonisation through the uptake of these technologies. In addition, the shift of cargo from the road to the sea can reduce road congestions, improve air quality and safety, and reduce CO2 emissions.

Concrete suggestions to further improve the environmental performance of shipping
In a separate publication5, ECSA suggests a number of concrete actions to be taken by the EU to support the efforts of the shipping industry to reach climate neutrality as soon as possible this century. Port call optimisation, i.e. optimising the access of ships to ports in a planned schedule, can reduce CO2 emissions substantially. The potential for harvesting such low-hanging fruits has to be recognised and put into effect as a matter of priority. Shore power and infrastructure for alternative fuels will enable the delivery of alternative (non-fossil) fuels in key European network ports, including electricity.