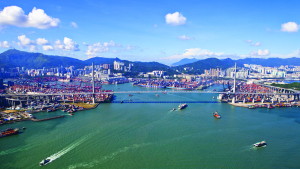 The Hong Kong Container Terminal Operators Association (HKCTOA) is urging the government to provide additional barge berths and back up land to “restore the competitiveness” of Hong Kong Port.

Container volumes fell by as much as 10% at the port last year and a prolonged decline has seen it fall from the busiest container port in the world in 2004 to just the fifth currently ranked by annual throughput.

Jessie Chung, chairperson of the HKCTOA, stated: “There is an urgent need for additional barge berths and back-up land for handling the high barge and transhipment volumes, which occupy space in the terminals for longer periods of time than truck based cargo.”

“More ultra-large vessels berthing, alliance restructuring and additional transhipment volumes have increased the operational complexity that we all face,” she added.

The Hong Kong government’s proposals, released in mid-2015, outlined the first phase in raising the yard to berth ratio of Kwai Tsing Container Port from 11.6 ha to 12.4 ha, per berth.

“The current yard to berth ratio is far below the international standards, in this regard, every bit of land is particularly important to our operational efficiency,” noted a statement from the HKCTOA.

The land optimisation and other infrastructure initiatives that the industry originally proposed would enlarge the total storage area and increase annual capacity by 3-4m teu, equivalent to an additional three or four new container berths.