Hamburg increases use of inland waterways 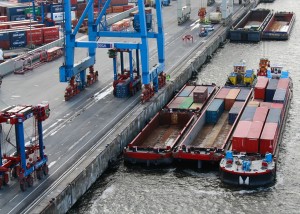 A German logistics expert is upping its use of inland waterway vessels as a greener alternative to truck transfers.

HHLA subsidiary CTD Container-Transport-Dienst, which carries out a large proportion of the container transfers between the different terminals and depots at the Port of Hamburg, sees the waterways an important alternative for the future.

“Transporting containers on inland water vessels is not only a cost-effective and environmentally-friendly solution but we also manage and assume custody of the containers on the customer’s behalf. If they wish, we can even put the containers on a train to take them out to the hinterland,” said Ralph Frankenstein, CTD’s managing director.

He added that CTD, together with its partner, the Deutsche Binnenreederei (DBR), is actively seeking out containers that are suitable for barge transport, including very heavy, 20-foot containers and multiple containers that need to be taken on similar routes.

DBR uses inland water vessels which don’t have any of their own propulsion. They are loaded at the quayside and then they are picked up by a pushed barge to be transported together as a fleet.

Although the majority of transfers are still carried out by trucks, in May 2017, CTD transported 1,058 of its 14,469 containers using these vessels. This amounts to 7.2%, a record high for the company.