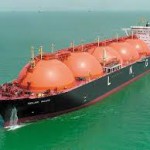 Gaztransport and Technigaz (GTT), designer of membrane containment systems for LNG transport and storage, has secured an order for nine LNG carriers being built by Daewoo Shipbuilding and Marine Engineering.

The vessels will be built with the NO 96 membrane technology, which is well suited for ice-breaking duties which the LNG carriers will be carrying out. It also allows for an optimised daily boil-off rate of cargo LNG.
“We are very proud of having succeeded in convincing the various partners in this project that the GTT technology is perfectly adapted to this type of difficult environment,” said Philippe Berterottière, chairman and CEO of GTT.
Six of the new vessels will be owned jointly by Teekay and China LNG Shipping (CLNG) and three others will be jointly owned by MOL and CSLNG.

These nine LNG carriers follow an identical Sovcomflot order of an LNG carrier, which was also built with NO 96 technology.
GTT says these are the world’s first ice-breaking LNG carriers ever ordered. They will link the Liquefaction production plant at Yamal, located in the North West part of Russia, and numerous in North East Asia, travelling via the Arctic Ocean.
The new vessels are expected to be delivered between 2017 and 2019.