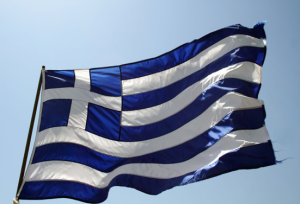 Despite this, overall fleet capacity has still increased by 391m GT during this period, already more than the 355m GT added during the previous decade.

This has been driven by owners from a select set of countries, with just ten owner nations responsible for 75% of all of the growth.

Greek owners have been responsible for the largest volume of fleet growth since the start of 2010, with 89.3m GT entering the Greek owned fleet during this period. This has seen Greek owners cement their position as the largest owner nation, having overtaken Japanese owners during 2013, with a sustained level of deliveries and secondhand purchases in recent years. The Chinese owned fleet has grown by the second largest total since 2010 (73.7m GT), whilst the Japanese owned fleet has increased by 32.2m GT.

Of the ten national fleets to have grown by the largest amount of tonnage since the start of 2010, nine are amongst the largest owner nations as of 1st May 2017. Only Canadian owners are not part of the ten largest owner nations (ranking 13th with 24.5m GT), highlighting that recent growth has been driven by countries with established fleets. The exception to this trend are German owners, who own the fourth largest fleet with 85.4m GT, but have experienced a 12% reduction in fleet tonnage since 2013.

The global fleet has increased by 44% in GT terms since 2010, with all regions seeing a sustained level of growth. The European and Asia/Pacific fleets have grown almost equally in this period, by 164m GT and 168m GT respectively. However, there have been some notable differences in the diversity of this growth. European growth has been primarily driven by Greek owners, whose fleet has grown by 74% in GT terms since 2010, equivalent to 54% of European growth. By comparison, Norwegian and Italian growth has only accounted for 9% and 7% of European growth respectively. In contrast, Asian fleet growth has been driven by a wider set of nations. Whilst Chinese owners account for 44% of total Asia/Pacific fleet growth in GT terms, Japanese (19% share of growth), Singaporean (10%), South Korean (9%) and Taiwanese (6%) owners have also experienced notable fleet growth since 2010. 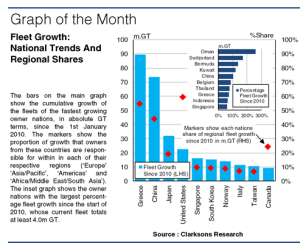 Outside of the largest owner countries, there have also been some notable developments amongst smaller owner nations. The Omani owned fleet has increased by 257% in tonnage terms since 2010, whilst the Swiss, Bermudan and Kuwaiti owned fleets have all more than doubled in size. With total fleet growth slowing, some of these smaller owner nations are becoming more influential in regional and global growth patterns.

So, whilst fleet growth has slowed since 2010, a significant volume of capacity has still entered the fleet, primarily owned by companies from established owner countries. However, some smaller owner nations are growing at a rapid rate, showing that fleet growth can still come from a wider range of sources too.