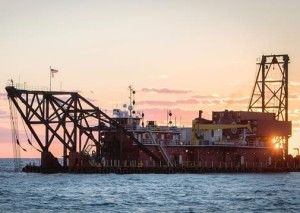 It was first implemented in 2012 and transfers container handling equipment from diesel to electric power.

By the end of August, 45 will have been transitioned from diesel to electric power or purchased with electric power capability, bringing GPA’s eRTG fleet to 30% of the total.

“The eRTG project is unique and innovative, a model others can follow with GPA’s partners to effectively work together for a common goal to reduce energy usage and diesel emissions,” said Griff Lynch, incoming GPA executive director.

Hope Moorer, general manager of waterways and navigation programmes received that awards at a US Environmental Protection Agency awards ceremony held in Washington, D.C on behalf of the GPA.

GPA has invested over $17.5m in the 45 electric RTGs. Over the next 10 years, it is expected that the entire fleet of 169 machines will have electric power capability.

This project increases capacity and productivity in an environmentally responsible way, as the eRTGs use 95% less diesel fuel than conventional RTGs.

The 2016 Clean Air Excellence Awards are given to state, local, tribal, and private sector programs that educate the public in improving air quality or reducing harmful air pollutants or greenhouse gas emissions.

Janet McCabe, acting assistant administrator for EPA’s Office of Air and Radiation, said: “Each of these award winners has taken real, tangible steps to improve public health in their communities by reducing air pollutants or greenhouse gases.”

She concluded: “These projects reflect the creativity and commitment of public and private sector organisations to make a difference and drive us toward a cleaner, healthier future.”

Other winners included Santa Barbara County Air Pollution District for the Community Action Award, Smartpower of Washington for the Education and Outreach award, and the Southern Ute Indian Tribe Air Quality Programme for the Regulatory and Policy Innovations award.