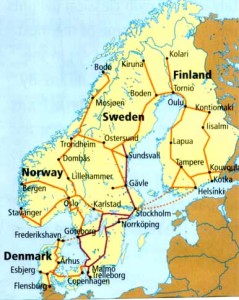 Replacing the old city centre-located terminal, the 65,000sqm Arken Combi Terminal opened last month and, with a higher capacity, is handling six trains and more than 100 trucks per day. This has enabled more containers and trailers to be transferred between rail and road for onward distribution to companies throughout Sweden.

“Thanks to the excellent collaboration with our contractor NCC and the operator Sandahls Goods & Parcel, we now have a complete, world-class combi terminal and more quickly than we had ever hoped,” said Magnus Nordfeldt, project leader at Gothenburg Port Authority.

He added: “There hasn’t been any time for a honeymoon. In effect, all the freight from the old terminal in Gothenburg city centre was directed here overnight.”

As the terminal is now situated inside the port the trucks transporting goods day can avoid having to negotiate Gothenburg city centre, making the transport process more efficient, with less queuing and lower nitrogen oxide emissions, said the port.

Arken Combi is also located closer to the companies it serves and has a better-adapted road infrastructure to and from the terminal.

Featuring seven rail tracks, the terminal will handle trains to and from Europe, alongside Swedish trains.

The facility is electrified throughout and is located beside the ro-ro terminals, meaning trailers and other wheeled cargo can be rolled onto and off vessels with ease.

In one year, it is estimated that 100,000 trailers will be transferred from one mode of transport to another at the terminal.