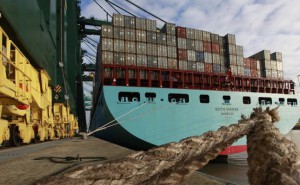 Copenhagen – Maersk Line, the container shipping unit of the AP Moller-Maersk (APM) group of Copenhagen, has reduced its estimate for the growth of global container shipping volume this year, and reported a fall in the unit’s 2Q15 net operating profit after tax (NOPAT). “Maersk Line reiterates the expectation of a higher underlying result than for 2014 [USD 2.2 billion]. Global demand for seaborne container transportation is revised to an expected increase of 2-4%, versus previously [of] 3-5%,” APM said in a statement. Maersk Line reported a 2Q15 NOPAT of USD507 million, down from USD547 million in the same period last year. Revenues fell to USD6.26 billion from USD6.90 billion. This was primarily driven by the decline in the average freight rate to USD2,261/FFE, only partly offset by a volume increase of 3.7% to USD2,484k FFE.

In 1H15 however, NOPAT rose to USD1.22 billion from USD1 billion. Revenues fell to USD12.52 billion from USD13.37 billion. “Despite a sharp decline in the average freight rate of 14.1%, Maersk Line delivered a 10.1% (10.8%) ROIC based on its cost leadership strategy,” said APM.The freight rate decline was largely attributable to bunker cost savingsbeing passed through to the customers and to deteriorating market conditions on the Asia-Europe trade. “Global container demand is expected to have grown between 1-2% in 2Q15 compared to 2Q14. The soft market development was primarily due to weak imports into Europe,” APM advised.

Estimated EBIT-margin gap to peers was at 6.8%-points in 1Q15. This remains consistent with Maersk Line’s ambition to sustain a five-percentage-points gap over its peers. Unit cost decreased by 13.1% to USD2,246/FFE, benefitting from decreased bunker prices and the USD appreciation. Bunker cost decreased 40.1% compared to 2Q14.