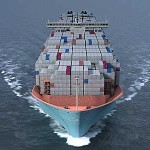 Global container trade appears to have increased again in June, according to the latest RWI/ISL data.
The latest Container Throughput Index of the Rheinisch-Westfälisches Institut für Wirtschaftsforschung (RWI) in Essen and the Institute of Shipping Economics and Logistics (ISL) in Bremen increased from (unchanged) 121.3 to 123.2 points. Thus, the index reached the highest value observed to date.

The data for May remained unchanged compared to the “flash” estimate issued a month ago. The current flash estimate for June is based on data of 36 ports covering two thirds of the container throughput represented in the index. Therefore, no major revisions are expected to be necessary.

The index is based on data of 75 world container ports covering around 60% of worldwide container handling. The ports are continuously monitored by the ISL as part of its market analysis.

Because so much international merchandise trade is transported by ship, the development of port handling is a good indicator for world trade. Many ports release information about their activities just two weeks after the end of the respective month, so RWI/ISL believe that their Container Throughput Index is a reliable early indicator for the development of international trade and hence for the performance of the global economy.