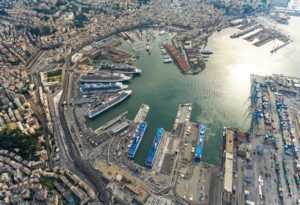 AdSP – Western Ligurian Sea Port Authority has published a €80 million ($88.5 million) tender for the executive design and construction of the first phase works of the new breakwater of the port of Vado Ligure.

The tender starting price is €77.89 million, including €627,000 for design costs and just over €1 million for security charges. The offers can be presented until 12.00 on Wednesday 30 October.

The schedule is a 6-month deadline for the realization of the executive project and 36 months of construction from the date of delivery of the works.

It is planned to dismantle about 400 meters of the current pier and to re-use the 13 structures removed in the new dam, in addition to laying two structures from scratch. The new “sopraflutti”, turned towards the open sea to improve the maneuverability of the ships, will have deeper drafts, from 35 to 49 metres. In the final configuration, the first phase breakwater will be stretched towards the sea for another 240 meters. At the foot of the caissons there is a row of “guardian” boulders, and the entire overflow dam will be crowned by a 2.5-metre-high concrete superstructure and a wave wall that will rise for another 4.5 meters, to the protection of ships and structures.

The port of Vado has developed to the west of the city of Vado Ligure and today port operations cover a surface area of approximately 350,000 m². Over the years, the port has focused on the fruit and ferry commodity sectors, while the natural harbour provided unloading facilities for petroleum products transported to industries along with the coast and oil refineries in the hinterland.