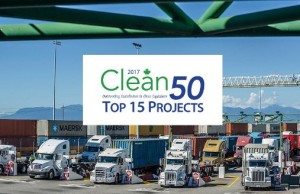 GCT Canada has been announced as a recipient of Canada’s Clean50 Top 15 Projects Award for 2017 from Delta Management, for its dedication to establishing a coordinated system to improve truck processing times at its GCT Deltaport and GCT Vanterm container terminals in the Port of Vancouver.

As the largest maritime employer in the country, GCT Canada was the first terminal operator in North America to introduce a truck reservation system voluntarily in 2004, setting the industry standard.

By doubling the operating hours and changing industry behaviour, GCT Canada was able to maximise the use of existing public and port infrastructure, which created opportunities for additional trade growth and in turn created 377 new jobs, with zero public funding.

Together, the implementation of truck reservations and night gate systems at GCT Deltaport and GCT Vanterm have successfully reduced congestion and associated greenhouse gas (GHG) emissions and air pollutants along its value chain, while improving stakeholder productivity and enabling future business growth.

GCT Canada recognises the value of industrial land in the Lower Mainland. In order to mitigate potential negative environmental impact, the company’s approach to capacity development makes every effort to densify operations within an existing terminal footprint.

Marc Garneau, PC, MP, Minister of Transport, said: “Environmental sustainability is clearly front and center for responsible and successful corporations who are serious about doing their part to fight climate change. I would like to congratulate and thank GCT Canada for their continued commitment towards reducing GHGs by developing new innovations, and by expanding their operations in an environmentally responsibility way.”

Peter Xotta, Vice President of Planning and Operations at the Vancouver Fraser Port Authority, said: “The port authority commends GCT Canada’s focus on improved efficiency and sustainability, which contributes to our vision to be the world’s most sustainable port by delivering economic prosperity through grade, maintaining a healthy environment, and enabling thriving communities.”

Stephen Edwards, President and CEO, GCT Global Container Terminals Inc, said: “At GCT, we are committed to improving our environmental standards through not only new innovations in the way we operate, but through smart developments by growing our business without expanding our footprint. This is exactly what we have done by creating efficiency through our innovative truck processing, and look forward to extending this sustainable approach to many initiatives in the future.”

Fact File: Canada’s Clean50 Top 15 Project Awards are announced annually by Delta Management Group and the Clean50 organisation to recognise the 15 sustainability oriented projects, completed in the previous two years, which have done the most to advance the cause of sustainability and clean capitalism in Canada. Projects are selected for their innovation, ability to inspire others, or to inform.