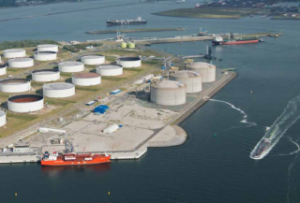 Sometimes, it is easy to implement the sustainable alternative in the maritime industry. When it is time for a new antifouling on the hull of a vessel, it is easy to choose a non-toxic variant. Other sustainable transitions take more effort. Like LNG.

This fuel, that makes marine propulsion more environmentally friendly, is promising. But it takes large investments in making or adjusting vessels to work on the fuel and also building an infrastructure that supports these LNG ships. The change can only be set in motion as the big boys pull in.

Koninklijke Vopak and Nederlandse Gasunie are companies which believe in LNG as a maritime fuel for the future and are not afraid to invest in this development. They partnered to build Gate terminal at Maasvlakte 2 in Rotterdam.

The four functions of the terminal are: receipt, storage, regasification, and supply. Gate terminal is an “open terminal” – it does not buy LNG but only provides services for those who deal with LNG. The main function is to feed the national grid that supplies households with natural gas on behalf of the terminal capacity users such as Uniper, OMV, Eneco, Shell and Dong Energy.

This focus leaves room to invest in other aspects of the use of LNG – for instance, as a fuel for the transport sector like trucking or shipping.

“We want to contribute to improving the supply chain when it comes to LNG as a fuel,” Rolf Brouwers, Managing Director of the Gate terminal, says.

“Because if you want to make shipping more environmentally friendly, LNG is the only serious alternative available. It is the best option at moment.”

LNG, for those who don’t know, stands for liquefied natural gas. It is natural gas that has been converted to liquid by cooling it to approximately -160 °C. This is done to ease its storage or transport.

When it is used as a fuel, it is better for the environment because it has virtually no sulfur content and particulate matter and its combustion produces low nitrogen oxides (NOx), compared to fuel oil and marine diesel oil. Next to that, LNG produces fewer carbon emissions (CO2). Also, because it burns much cleaner, engines last longer and need less maintenance.

Because of green awareness and new regulations, more and more ship owners use LNG. But to make it a real success, LNG must be available to ships when in need of fuel. In other words, the supporting infrastructure needs to be extended.

At the moment, bunkering in the Netherlands is mostly done by trucks but new developments at Gate terminal are going to change that. Normally, only big tankers that transport LNG from all around the world could be moored at the Gate terminal but recently the terminal was expanded by a third berth and special infrastructure for the loading of small LNG vessels.

These smaller vessels can bring LNG to terminals that cannot be reached by big tankers because of their draft. But more important for the maritime industry, vessels can load LNG at the Gate terminal that is used for bunkering, too. Trucks lose their monopoly on delivering LNG as a maritime fuel in and around the Netherlands. It makes it also possible to bunker at sea.

“We believe in LNG as the future maritime fuel, but to become a widely used fuel some steps have to be taken. This third berth is one of them,” Brouwer says.

Last summer, Brouwer noticed a change in the air:“Multinationals are joining the early adopters in their embrace of LNG.”

From 2019 onward, Volkswagen will transport vehicles between Europe and North America on LNG-powered RoRo vessels. Also, leading cruise company Carnival Corporation is investing in LNG. The company now has agreements in place to build seven LNG-powered cruise ships in coming years. The first of these ships is expected to be in service in 2019.

Moreover, Shell is a big promoter of LNG as a marine fuel. From the start, the energy company vowed to buy capacity from the Gate terminal. This commitment enabled the investment in the terminal expansion. Shell has been a pioneer in LNG for more than 50 years and is one of the world’s largest LNG shipping operators, managing and operating more than 40 carriers.

Last September, Shell’s chartered LNG vessel, the Coral Methane, was the first vessel to use the new jetty. According to Shell, the Coral Methane will provide security of supply of LNG for marine and road transport customers in northwest Europe. In the future, Shell will also supply LNG from the Gate terminal to fuel two of the world’s largest passenger cruise ships.

Brouwer believes that a sustainable mindset is indispensable in leading a modern day business. Going green is not only good for the environment but also for the company itself.

The Gate terminal uses the residual heat from production processes of nearby power plants for the regasification process. “These plants heat up sea water in the cooling process with seven degrees Celsius. We cool it down seven degrees again when turning LNG into natural gas.” When Gate terminal releases the water back to sea, it has the same temperature as the sea water.

There will be a long road ahead before LNG becomes the leading marine fuel, Brouwer admits. “But we should not be afraid to take the necessary steps in this transition. Ports have to be socially relevant and being sustainable is a big part of this role. The port of Rotterdam is leading in this matter and we are happy to contribute in this green process.”