Into the future – Baltic So2lution 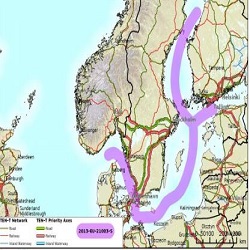 Into the future – Baltic So2lution

The pilot project, part of part of Priority Project 21 (Motorways of the Sea), aims to minimize the emissions of transport routes along the Motorway of the Baltic Sea by introducing an innovative and environmentally friendly transport model and a generic low-emission, dual-fuel engine technology package that would be suitable both for new-built and retrofitted vessels. A LNG driven product tanker will act as a first test bed for the low-emission technology package, operating mainly between Sweden and Finland and stopping at 21 different ports and terminals. The project is expected to increase the demand of LNG in the area and promote the deployment of LNG bunkering infrastructure in the ports according to the EU legislation on alternative fuels infrastructure. A lack of LNG bunkering infrastructure is currently a clear bottleneck in the Baltic Sea. As such, the project will support the objectives of the Global Project which aims at finding solutions to reduce emissions from maritime transport in a safe, environmentally sustainable and technically viable way. Among others, it will support the development of a strong, safe and competitive shipping sector and contribute to the successful implementation of the Motorways of the Sea in the Baltic Sea region. It will also help the shipping sector to comply with the Sulphur Emission Control Area (SECA) entering into force as of January 2015.