Focusing on the environment 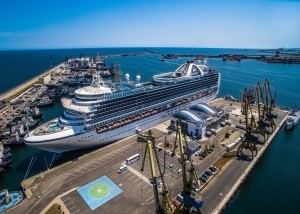 The Port of Constantza, ESPO’s port of the month, has its eye firmly on improving green management and environmental policies.

It has already been working on the CEF accepted project, Protect, which includes the building of an on-shore ship waste collection facility.

“Together with five modern multipurpose vessels for different environmental tasks, it will bring Constantza at the same foot with other ports of similar size,” the port commented.

It has also already prepared a new Constantza Green Port Project which is aimed at developing a new permanent environmental management system that will decrease the negative impact on port activities.

A representative from the Port of Constantza added: “In parallel, we are negotiating with strategic investors concerning several recycling projects and the production of green energy, of which the port will be the main buyer.”

Located at the Black Sea coast of Romania, the port is fully intermodal, offering transport possibilities by road, rail, IWW, a pipe network and air cargo.

The main challenge of the port is to continuously adapt to larger ships and new types of cargo by upgrading existing port facilities to the level needed as a TEN-T core port.

Over the last five years, the Port of Constantza has become a major Eastern gateway for agro-related business in and out of Romania, Moldova, Northern Bulgaria, Serbia, Croatia and Hungary.

The port hopes that its continued green policies and investments in improving its environmental stance will lead to further success if the future.

It stated: “We already obtained about €14m from the last CEF Call and we are preparing projects for the next Call.  Moreover, we are preparing about €250m of projects to be submitted until 2017 for the Major Projects Program.”

“It is our wish to be able to say in a couple of years that the Port of Constantza, being both a maritime and river port, is one of the TEN-T ports that responded to change in terms of modern logistic operations.”