First private highway in Russia to connect China with Western Europe expects to attract about 3.5% of the container traffic via the Suez Canal

A very ambitious project for the first private toll highway project in Russia, which is going to provide the missing section in the China-Western Europe road link, has been approved by the Russian government and its construction reportedly has started. 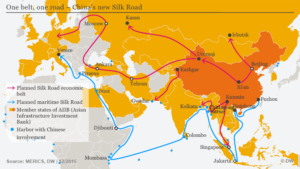 The shortest possible road link between the Russian-Kazakh border and the Russian-Belorussian border will be 2,000 km long. It is called Meridian highway and is a brainchild of the former deputy chairman of Russian gas monopoly Gazprom Alexander Ryazanov.

Ryazanov said that the cost of the project is estimated at 594 billion rubles (€8.4 billion). Very surprising is his claim that his company, called Russian Holding, already owns 80% of the land the road would run through. But it’s still unclear how Russian Holding will attract the financing needed for the construction of the highway, unless China steps into the game and the Russian government provides services and support.

According to Russian business daily Vedomosti, Russian Prime Minister Dmitry Medvedev has ordered government officials to consult Ryazanov’s Russian Holding on attracting investment for the project and giving it the necessary support.

The Meridian highway is expected to reach a break-even point in some 14 years. This is going to happen due to a not yet confirmed agreement with the state that it would guarantee a minimum income of 35 billion rubles (€495 million) every year in case of political and other risks. The government might also issue a state guarantee for financing of 200 billion ruble (€2.83 billion).

Meridian will connect to the existing highway between Moscow and Belorussian capital Minsk. From there there is an already existing (or easily upgradable) road network through Poland to Germany, Czech Republic and Slovakia, but also to Lithuania and the other Baltic states.

By 2024, the Meridian will shorten trucking routes between cargo hubs in western China and central Europe and offer a faster (and more expensive) alternative to three existing rail corridors. The Meridian is among at least three competing motorways that have been proposed as Russia’s contribution to China’s Belt and Road initiative (new Silk Road). The Meridian will also offer the main part of a Caspian Sea-Baltic Sea road connection.

There are several unclear issues about the new highway. Its project company expects to attract some 3.5% of the container traffic that today goes via the Suez Canal. But the road transport cost is going to be significantly higher and might be useful only for perishable goods (they are usually not in the containers that sail via the Suez Canal).

Ryazanov himself estimates that 600 heavy lorries will use the road and pay a toll every day – this is a symbolic number.

The preliminary Meridian calculations show that the construction of 1 km of the new highway will cost 300 million ruble (€4.24 million), but it looks like the company behind it (Ryazanov’s Russian Holding) might ask the Russian government to help with the construction of bridges, overpasses and the underground communication and other infrastructure.