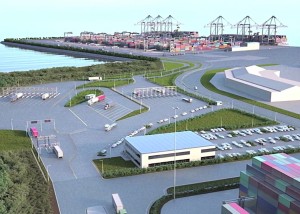 Mark Welles, VP and GM of Asia Pacific at Navis, commented: “The N4 Terminal System will allow VICT to optimise operations, speed turnaround times and deliver a new level of unprecedented efficiency in key areas of the terminal.”

Kalmar stated that through optimising scheduling, container flows and the performance of the machine fleet, automation improves operational efficiency and minimises the environmental impact of the terminal.

Automation also detects issues which humans might not, create a safer workplace for port and terminal workers as well as reducing operating costs, said Kalmar.

It explained that “when a manual terminal is converted to an automated operation, labour costs can drop by up to 60% and power and fuel costs by up to 25%.”

Christian Gonzalez, VICT chairman and senior vice president of ICTSI’s Asia Pacific region, added: “We chose Kalmar’s cutting-edge technology and equipment and Navis’ software and it is enabling us to reach the highest standards of port safety.”

The 35-hectare VICT has an annual capacity of one million plus twenty-foot equivalent units (TEU), and an additional 400,000 TEUs on full build.ù