Shipping, Ports and Transports / Transport /
05 May 17 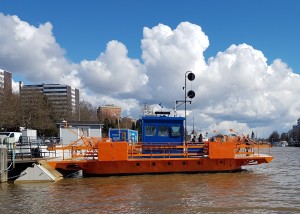 First in service in 1904, the Föri ferry was relaunched in Turku, South West Finland, with a new zero-emission electric drivetrain that aims to be more efficient, create less noise and enable reduced operating costs.Visedo project engineer, Heikki Sallinen, said: “The Föri ferry is a national treasure but with its old diesel engine, fuel consumption and emissions were high and overall efficiency poor. Visedo power brings the 100-year-old vessel into the 21st century without changing its character and delivers zero-emission transport for Turku.“The revolution to electrify the world’s diesel transport is already underway. After powering Asia’s first hybrid electric ferry in Taiwan and continuing to work on the project to power the world’s biggest E-ferry in Denmark, at home Visedo is proud to help transform Finland’s oldest ferry into its first all-electric vessel.”The city of Turku commissioned boatyard and engineering company Mobimar to remove the ferry’s diesel-powered hydraulic motor and the old control system and install a new system that is eight tons lighter.The upgraded vessel incorporates two Visedo permanent magnet motor drives and two Visedo DC/DC converters which control its DC grid.It uses batteries that are charged overnight, simultaneously improving redundancy and making it possible to run on one or two motors. This also allows future motor maintenance in shifts, with no interruption to operation.The DC/DC converters serve to increase the battery voltage to a level that is more suitable for the motor drives.