Fincantieri cashing in on LNG ships for Costa 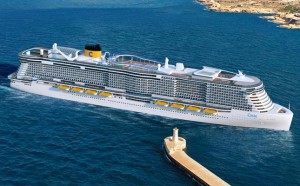 Trieste – It was announced jointly by Carnival Corporation, Meyer Werft and Fincantieri last March in a memorandum of understanding that marked the future of the European shipbuilding industry: a mega contract for nine units, divided between the two shipbuilding companies which was to be finalized with the signing, in the following months, of the final contracts. Over the summer, Germany’s Meyer Werft had their share of the order formalized: four 183,000 gross tonnage (GT) ships, divided between their shipyards in Papenburg (which will build two units for Aida) and Turku (two units for Costa).

Still nothing official on Fincantieri’s share, but rumours within the industry suggest that the order for the remaining five ships could be distributed between the three Carnival brands: two for Costa Cruises, two for Princess Cruises and one for Holland America Line. But let us narrow down the most credible scenarios. The ships destined for Costa will likely be in the same class as those that will be built in Germany, since the project’s design came out of Carnival’s technical office; on the drawing board then, are hybrid ships, powered both by diesel and liquefied natural gas. For Fincantieri it will be quite a challenge to compete with Meyer Werft on the application of this technology, even though the Italian group has built an LNG powered ferry, the “F.A. Gauthier”.

As the ships for Costa will be 337 metres long, the only shipyard capable of handling the project is the Monfalcone location, with its reservoir of 350 metres. As for the two Princess units, we can assume they’ll be another two Royal class units, with a gross tonnage of approximately 145,000 tons. Being 330 metres long, these could also be built at the shipyard in Marghera, near Venice, (335 metres long); what’s yet unclear is whether the facilities there would be up to the task (the other units of the same class were built in Monfalcone).

Finally, the ship for Holland America Line will most likely be the third of the Koningsdam class, 99,500 tons, and, in this case, the Marghera Shipyards should be the recipient of that order. In any case, last March’s Fincantieri-Carnival announcement already indicated that the orders were aimed at the Monfalcone and Marghera shipyards, with deliveries expected between 2019 and 2022.

The other Italian shipyards of the group, however, stand to benefit from all this work, as Fincantieri has a long-standing practice of splitting projects into sections, to be distributed between all its production sites, including Genoa. Let’s recall that, both with regard to the contract intended for Meyer Werft, as well as for Fincantieri’s part, the options on future orders is an integral part: in practice then, the development of European shipbuilding industry for the next 10 years, which largely concerns Fincantieri itself, hinges on this agreement.

So far, for the Italian group this has been a golden year for both new orders and workload. Remaining on the topic of cruises, the Monfalcone shipyard is currently finishing work on the 133,000 ton Carnival “Vista”, and constructing in the dry-dock a third Royal class Princess ship. The shipyard’s order book is topped by the two 154,000 ton ships for MSC Cruises, to be delivered in 2017 and 2018 (there is also the option for a third vessel for delivery in 2021). As for the Marghera Shipyard, the “Koningsdam” is under completion and the 41,000 ton Seabourne “Encore” is under construction. Later, at this Venetian shipyard the twin ships “Vista” and “Koningsdam” are to be built, with deliveries expected at the beginning and end of 2018, respectively.

Moving to the Genoa-Sestri Shipyard, where they are building the “Seven Seas Explorer” (56,000 tons) and the “Silver Muse” (40,000 tons), then the “Seabourne Ovation” (delivery in 2018) will probably follow, and almost certainly it is this shipyard that will be selected to fulfill Virgin Cruise Line’s order (three 110,000 ton ships with deliveries in 2020, 2021, 2022). Finally, Ancona shipyard will be responsible for delivering to Viking Ocean Cruises, three 47,000 ton ships (one is currently undergoing finishing work and another is under construction).