Shipping, Ports and Transports / Transport /
15 May 15

Fees skyrocket as port is privatized 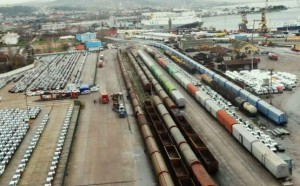 Derince – A blow to ro-ro operators and car manufacturers: following the privatization of the Port of Derince in Turkey, usage fees for ro-ro have hit the roof. As the winners of the contract, Safi Kati Yakit Sanayi ve Ticaret began operations. Following their successful $543 million bid, usage fees at the port have steadily climbed by an estimated 450% last month. Safi won the tender issued by the now former owners of the port, the Turkish State Railways Administration. The company has committed to invest $300 million in the construction of new facilities that it said would be operational within 5 years. In 2013 the Port of Derince handled over 500,000 vehicles, almost twice the volume of the neighbouring Port of Keocaeli which is operated by Ford, Otosan and Gemport. However, despite stipulations by the Turkish government that operating costs should be frozen for three years, Safi has decided to impose new tariffs. The Association of European Vehicle Logistics (ECG) has estimated the increases to be equivalent to an extra $10 million per year for the four shipping operators that use the port, which are Grimaldi Lines, UECC, Neptune Lines and EML.

Derince port rents storage space to ro-ro operators and other service companies which in turn manage their own terminals within the port.As expected, the sudden and steep increases have disgruntled many operators. A spokesperson for Grimaldi, Costantino Baldissara, the group’s director of Commercial Logistics and Operations, said that it won’t be able to absorb the extra costs of operating at the port, which the company calculates as an increase of $1.5 million per year; therefore it will be forced to pass the extra costs to its customers, including car manufacturers. “It’s been impossible to bring up the matter with the new owners, there’s no room for negotiation,” concludes Mr. Baldissara. No pronouncement has been made yet by car manufacturers. Only Toyota – one of the main car producers which, together with Honda, Hyundai and Daimler call at the port – expressed that it was “aware” of the situation.

The views of Mr. Baldissara were echoed by Peter Menzel, Commercial Director at Neptune Lines: “Safi has imposed a drastic increase in handling tariffs and unilaterally withdrawn from agreements made with several service providers. Clearly,” adds Mr. Menzes, “the new tariffs will have a dramatic effect on port users.” Some speculations have surfaced regarding the possible intention of Safi to discontinue ro-ro handling, possibly in favour of the more profitable container business.There’s been no comment from the company nor has it given in any way the rationale behind the increases or its intentions regarding the future of ro-ro services. Where does this leave affected companies and car manufacturers? Should they look elsewhere for lower tariffs? The reopening of the Port of Yenikoy could represent an alternative for operators but here too, it seems, tariffs have risen suddenly. The verdict is still out and this could create turbulence for Turkish exports; as Costantino Baldissara pointed out: “They’re opting for a short-term strategy that could result in customers shifting production in order to avoid the cost increase”.