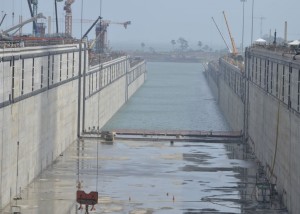 More than 90% of the global LNG fleet can transit the Panama Canal since its expansion, enabling US producers to ship LNG to Asia more quickly and easily.

LNG boats represent 9% of vessels that have passed through the canal in the first 12 months post-expansion and this is expected to increase as global trade routes change as a result of the development.

Panama Canal administrator, Jorge L. Quijano, said: “Looking forward, the next decade will serve as a significant next chapter in the Panama Canal’s story as we continue to advance various infrastructure projects within the region to further position Panama as the logistics hub of the Americas-for the benefit of our customers, and for the people of Panama.”

The canal’s expansion, completed one year ago, has allowed larger vessels to pass through its Neopanamax Locks, increasing tonnage by 22.2% over the 2016 and 2017 fiscal year, said the Panama Canal Authority (ACP).

It also contributed to the reduction of CO2 during its first year of operation because of the shorter traveling distances and larger cargo carrying capacity it offers.

During the last year, the Panama Canal has launched the Green Connection Environmental Recognition Program, which recognises customers who demonstrate excellent environmental stewardship and encourages others to implement technologies and standards that reduce emissions.

It also has plans to develop an LNG terminal on the Atlantic side of the waterway to provide LNG bunkering and redistribution capabilities.

ACP stated that the canal’s expansion has resulted in increased port traffic and infrastructure investment globally. It added that investment has been particularly prevalent among US East Coast ports, which have experienced strong growth and broken cargo records.