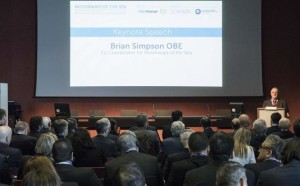 In his opening presentation at the Trieste conference, Brian Simpson did not rule it out: “It is possible to extend the benefits of the implementation plan to a non-European nation.” The E.U. coordinator is therefore leaving the door open to that possibility. What is of interest is that non-European countries could also access the financing.

But Italy is afraid that the door has been thrown wide open, because in the development plan that Simpson signed the wording is too vague: “The Motorways of the Sea include the maritime links between ports in the global network and between a port in the global network and a port in a third country,” as long as Europe defines it as strategic. This is what appears in the text of the plan. Assoporti has become aware that the definition is quite vague: in fact, this could stretch the already reduced benefits of E.U. financing to too many actors. “This authorisation of strategic links cannot work,” the Italian ports association has said, “unless one wants to extend this programme to other subjects that have no link to the MoS.” Besides the geographical problem, Simpson’s plan also calls for container carrier ships to be counted as part of the Motorways of the Sea. Assoporti began to raise the alarm: the Ministry soon started talks with Brussels.

The suspicion is that Northern European ports like Rotterdam are behind this: with this text, the plan seems intended to include the major shipping companies in the container sector with deep sea links. “But this is not what the Motorways of the Sea are,” Assoporti said. RAM, the MIT (Ministry of Infrastructure and Transport) company that is focused on precisely this, is more cautious: “Eliminating the reference to containers” might not be positive, because interventions are needed on the short sea feeder lines. But Simpson was reassuring and explained to Il Secolo XIX/The MediTelegraph, “We are talking about links between two European ports. At the most between one core port and one comprehensive port. There will be no exceptions.”