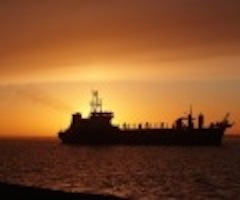 The EU remains committed to a 2018 start-date for a global climate deal for shipping, the bloc’s transport chief told reporters in London.
Fresh from delivering a UN aviation emissions cutting pact in Montreal earlier in October, Violeta Bulc said the maritime sector was next on her list.
“I believe the time is right… I believe everyone feels it’s time to contribute, realising it’s not somebody else’s backyard but our own,” the commissioner said.
“The momentum is right but we need to be realistic and set realistic goals, for that we need good governance, I hope by 2050 we will find solutions for zero [emissions] growth from transport,” she added.
Talks on new carbon cutting measures for ships kick off on Tuesday at the International Maritime Organisation (IMO), with governments apparently split on how to clean up the sector.
In 2014 shipping accounted for just over 2% of global greenhouse gas emissions. Carbon pollution levels from the industry’s freight and leisure divisions are projected to rise 50-250% by 2050, said an IMO study.
As Climate Home revealed earlier this year, the EU, France, Germany, Morocco and Marshall Islands are among those pushing for the IMO to contribute its fair share of global carbon cuts.
China, India and Brazil registered their opposition to the plans in a proposal sent to the UN in September, arguing a cap on emissions would be “fundamentally unfit” for the sector.
“As long as world trade is growing, shipping will grow too,” the major emerging economies argued.
Under the aviation emissions deal some routes to and from developing economies are exempted from carbon limits, allowing poorer countries space to grow their domestic industries and capacity.
One industry expert at the IMO talks told Climate Home this is unlikely to work in the shipping sector, given vessels frequently stop at a variety of ports making it harder to pinpoint exactly where a voyage starts and ends.
Meanwhile the EU is steaming ahead, with a regulation adopted in 2015 mandating large vessels visiting European ports to start recording their CO2 emissions. By 2019 Brussels requires this data to be sent to the Commission.
The unilateral move has sparked concern among international parties, but Bulc insisted the EU was committed to a global pact with widespread support.
“To have a deal you can’t leave anyone behind,” she said. “The important lesson from ICAO was that no country was left behind, and I’m happy we could do it in aviation.
“The  – and the major registries [Liberia, Panama, Marshall Islands] are important.”